The Question: Is everyone really so excited by the new Nokia 3310? 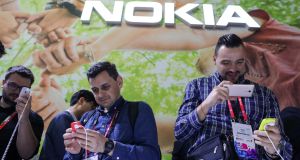 Checking out the Nokia 3310 at the Mobile World Congress in Barcelona, Spain. It has been launched by HMD Global, a Finnish company with a lot of former Nokia staffers, which has licensed the Nokia brand. Photographer: Chris Ratcliffe/Bloomberg 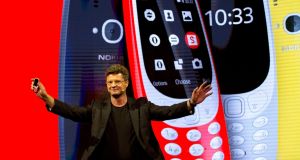 Arto Nummela, chief executive officer at HMD Global, with the re-launched Nokia 3310 phone. It is an upgrade on the original with a larger colour screen, micro-USB charging and a camera. Photograph: Emilio Morenatti/AP Photo

The announcement that the venerable Nokia 3310 was about to make a surprise resurrection generated a lot of hype this week.

The relaunch of the classic candy-bar design, at the sprawling Mobile World Congress in Barcelona, the epicentre of the mobile industry, overshadowed any number of fancy new smartphones and gizmos that were being unveiled.

The new version of the classic handset, originally released in 2000, is being made by HMD Global, a Finnish company with a lot of former Nokia staffers, and which has licensed the Nokia brand after the ill-fated acquisition by Microsoft was unwound last year. The reboot is a definite upgrade on the original – larger colour screen, micro-USB charging, even a camera on the back.

The blizzard of coverage revolved around a few recurring themes: look at that month-long battery life! And you can even play Snake again! But the hype prompted lots of people to wonder whether we are entering an era of smartphone fatigue: do we yearn for a dumbphone as an antidote to the attention-hogging slabs of glass in our pockets?

The question seemed to resonate. A decade into the smartphone revolution, many of us have an ambivalent relationship with the gadgets, with a palpable resentment at the degree to which we are dependent on them.

However, perhaps the smartphone fatigue belongs more to technology journalists – exhausted at finding new things to write about almost identical slabs of glass – than consumers.

Beyond that projection, it’s fair to say the hype is reflective less of a mass rejection of smartphone, and more a high degree of nostalgia among a certain generation of technology journalists.

Indeed, the return of the Nokia 3310 is perhaps best seen as a tech equivalent of a fondly remembered band from yesteryear announcing a reunion tour. It doesn’t represent the future, and won’t get much attention from younger generations, but instead will serve to remind people of a certain age of what it was like to be at the cutting edge, once upon a time.

Coronavirus: One person has died, as 21 cases diagnosed – NPHET

Coronavirus: One person has died, as 21 cases diagnosed – NPHET 17:54
‘Drug craze’: Use of laughing gas by under-18s should be banned – FG TD 17:37
Second ever woman elected to chair of Bar Council 17:16
Garda Commissioner disputes claim of journalistic privilege 17:02
Face masks: All you need to know about where, when and why you need one 16:29

1 Face masks: All you need to know about where, when and why you need one
2 Coronavirus: Unwinding of latest stage of roadmap ‘could be pushed back further’
3 Like ‘a grandfather at the sherry cabinet’: Trump’s meandering monologue
4 UK accuses Russia of election interference and trying to steal Covid-19 vaccine
5 Miriam Lord: Things just keep getting better for the new Taoiseach
Real news has value SUBSCRIBE