The Question: Can Twitter beat the trolls and revitalise itself? 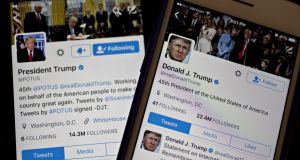 No Trump bump?: the US president’s Twitter accounts, @POTUS and @realDonaldTrump. Photograph: Bloomberg

This has been an eventful week for Twitter. Its latest quarterly reports reveal a stagnant business, with a 0.5 per cent year-on-year decline in revenue to $638 million (€597 million) and stalled user growth, prompting shares to plunge more than 10 per cent.

There was certainly no Trump bump for the social network, despite the new US president appearing to rule via tweet as much as by executive order.

Days before the results the company’s chief executive, Jack Dorsey, tried to convince everyone that he was serious about tackling Twitter trolls, announcing “a completely new approach to abuse”, preventing “sock-puppet accounts” from people already banned from the service, as well as effectively hiding “low-quality replies”.

In reality this was just the latest effort to crack down on harassment on the platform, which has been marred by the problem for several years. The combination of anonymity and @ replies, which makes tweets mentioning you hard to ignore, turns out to be a toxic one, as it reduces the social cost for horrible behaviour to a minimum, with the effect that Twitter can seem like a bullying forum.

As with all online-comment forums, Twitter needs strict policing. The company had an opportunity to establish standards using algorithms that could identify waves of harassment – and its staff have banned abusive tweeters with gusto. But management changes and a struggling business model, as well as an admirable faith in the value of free speech, have at times seemed to have distracted from this core challenge.

The scale of harassment is allegedly what dissuaded Disney from bidding for Twitter last year; finding another purchaser at this point looks like the only viable option for the tech company. Whatever the future holds, tackling harassment is key to Twitter’s survival.