The Question: Are computers now cleverer than us? 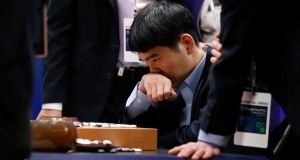 Perhaps not since Neil Armstrong set foot on the moon has one person been so vested with the responsibility of representing all of humanity. But instead of having his name attached to the pinnacle of human achievement, Lee Sedol will forever be associated with the moment the limits of human intelligence, and the potential of artificial intelligence, became clear.

In Seoul on Tuesday, AlphaGo, a program developed by Google, completed a 4-1 series defeat of the Korean in the ancient Asian game of Go, which is several times more complex than chess. Its subtlety and nuance make it a particular challenge for artificial intelligence.

As a test of machine-learning capability, Go has long been considered a key benchmark, and this success has come a decade ahead of many experts’ previous projections.

After losing the third game, and thus the series, Lee was shellshocked.

“I do apologise for not being able to satisfy a lot of people’s expectations,” he said, articulating the unique burden of letting down our species. “I kind of felt powerless.”

We have been here before, in some senses, with the chess grandmaster Garry Kasparov losing to IBM’s Deep Blue in 1997 and the same company’s Watson computer winning the US quiz show Jeopardy!

But we can understand those results as admirable achievements in raw computing power; AlphaGo may represent something far more profound, with its playing style quite unlike that of human beings.

Elon Musk and Stephen Hawking, among others, have expressed concern about the threat of uncontrollable artificial intelligence. Perhaps AlphaGo’s success will serve as an alarm for the complacent.

To paraphrase Neil Armstrong, in years to come we may look back at Lee’s loss to AlphaGo as one small defeat for a man, one big moment for mankind.