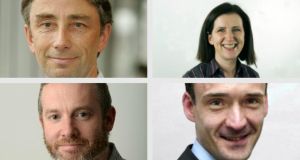 A series of new editorial appointments have been made at The Irish Times.

Paul O’Neill is being appointed Deputy Editor. He succeeds Denis Staunton, who is taking on the role of London Editor.

He will assume responsibility for news content across all platforms, print and digital.

Deirdre Veldon is being appointed Managing Editor (Development and Operations).

She will play a lead role in strategic projects and the development of new digital opportunities.

Outgoing Business Editor John McManus will move to the Editor’s office, where he will take on the role of Opinion Editor.

Managing Editor Cliff Taylor will assume an oversight role in the Business section on an interim basis.

Managing Editor Orna Mulcahy’s role is being revised to include digital and print projects and events, in addition to overall responsibility for publications ranging from the Saturday Magazine to Health & Family.

The new appointments will be phased in over the coming weeks.