The Irish eyewitness to the atomic bomb at Nagasaki

Dr Aidan MacCarthy was in POW camp: ‘I thought we had arrived at Judgement Day’ 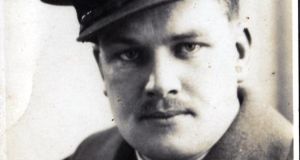 Dr Aidan MacCarthy, from Cork, of the RAF, who survived Dunkirk, the fall of Singapore, having his ship torpedoed and time in a POW camp, before being in Nagasaki on the day on the atomic bomb was dropped 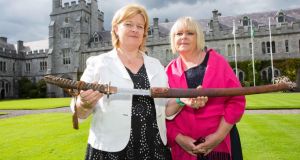 Daughters of the late Dr Aidan MacCarthy from Castletownbere, Co Cork. Nicola and Adrienne MacCarthy, with the sword presented to Dr Aidan by Japanese 2nd Lieutenant Isao Kusuno at the premier of ‘A Doctors Sword’ in UCC. Photograph: Darragh Kane 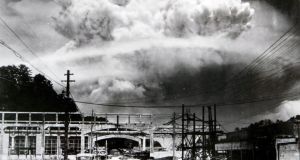 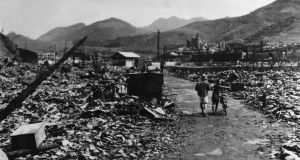 The ruins of Nagasaki after the dropping of the atomic bomb. Photograph: Getty

Seventy years ago today, the second – and hopefully last – atomic bomb used in warfare was dropped. The city of Nagasaki was incinerated in a millisecond as Hiroshima had been three few days previously.

There was one Irish eyewitness to the bombing at Nagasaki: Dr Aidan MacCarthy, from Cork, who had been a prisoner of the Japanese since the fall of Singapore in 1942.

He was based in a prison camp near the Mitsubishi factory in Nagasaki when the second bomb was dropped.

One of 10 children of a merchant family from Berehaven, Co Cork, he went to Clongowes Wood and graduated as a doctor from University College Cork in 1938.

With few opportunities at home, Dr MacCarthy joined the RAF. He had a remarkable war. He was at Dunkirk and the fall of Singapore. His prison ship was torpedoed by the Americans and he was captured by the Japanese.

Ironically, the bomb drop may have saved his life. Just days beforehand, the Japanese had made the POWs dig their own graves.

“We dug on incredulously, our feelings numbed. To dig one’s own grave is an extraordinary sensation. A sense of deja vu seems almost to overtake one,” he wrote. “I had a fantasy glimpse of my own shot-up corpse lying in the watery mud.”

Dr MacCarthy survived the war and spent the rest of his life in London. He died in 1995. His autobiography A Doctor’s War was published in 1979. He is now the subject of an documentary entitled A Doctor’s Sword.

Extract from A Doctor’s War by Dr Aidan MacCarthy: On August 9th the day started bright and clear with only occasional clouds to the north. During a 10-minute break in our clearing work, round about 10.45am, some of our men had gone back to the camp which was close by, to get a drink of water or a cigarette.

High above us we saw eight vapour trails showing two separate four engine bombers, heading south. These were B-29 bombers, or B-NEE-JU-KU’s as the Japanese called them. They had been seen going north earlier that morning. Then they suddenly altered course and came back over Nagasaki.

This manoeuvre was enough to send us wildly dashing for the air-raid shelters. To dig our own graves with a view to being shot by the Japanese was one thing, but to be killed by our own allies was far too galling.

In the shelters we prayed that there would not be a direct hit. A couple of POWs did not bother to go into the shelters, staying on the surface and crouching on the ground in the shadow of the barrack huts.

They were gazing at the sky, watching the approaching vapour trails. One of them shouted to us that three small parachutes had dropped.

There then followed a blue flash, accompanied by a very bright magnesium-type flare which blinded them. Then came a frighteningly loud but rather flat explosion which was followed by a blast of hot air.

Some of this could be felt even by us as it came through the shelter openings, which were very rarely closed owing to the poor ventilation. The explosions we heard seemed to be two in number and this puzzled experts when later we were being debriefed.

One possible explanation is that the second sound was a giant echo from the surrounding hills. All this was followed by eerie silence. Then an Australian POW stuck his head out of the shelter opening, looked around and ducked back in, his face expressing incredulity. This brought the rest of us scrambling to our feet and a panic rush to the exits. The sight that greeted us halted us in our tracks.

As we slowly surveyed the scene around us, we became aware that the camp had to all intents and purposes disappeared. Mostly of wooden construction, the wood had carbonized and turned to ashes.

Bodies lay everywhere, some horribly mutilated by falling walls, girders and flying glass. There were outbreaks of fire in all directions, with loud explosions recurring as the flapping, live electric cables fused and flared.

The gas mains had also exploded, and those people still on their feet ran round in circles, hands pressed to their blinded eyes or holding the flesh that hung in tatters from their faces or arms.

The brick built guardroom had collapsed, and the dead guards lay almost naked. We could suddenly see right up the length of the valley, where previously the factories and buildings had formed a screen. Left behind was a crazy forest of discoloured corrugated sheets clinging to twisted girders.

Burst waterpipes shot fountains of water high in the air. The steel girders stood like stark sentinels, leaning over a series of concrete ‘tennis courts’ that had once been the floors of factories.

But most frightening of all was the lack of sunlight in contrast to the bright August sunshine that we had left a few minutes earlier, there was now a kind of twilight. We all genuinely thought, for some time, that this was the end of the world.

As I dashed through the shelter opening and scrambled onto the surface, my predominant thought was to get away as far and as fast as possible. I turned and ran. Others followed. The sea seemed to offer the most immediate prospect of safety, but as we ran towards it, we encountered another mob running towards us.

Everyone seemed to be looking for an intact bridge across the Urakami river. We were on the south side and to make our way to the sea and hills we needed to cross to the north bank. Unfortunately no bridge seemed to be available so I jumped into the cloudy waters and swam. Unwillingly the rest of the group joined me in the water.

On the opposite bank we stuck in the black glue-like mud and discovered that struggling only made matters worse. Eventually, muddy, smelly and exhausted, we got clear of the river and headed for the foothills to the north of the valley.

En route we were physically sickened by an endless stream of burnt, bleeding, flesh-torn, stumbling people, many unable to rise from where they had fallen. Others were still trapped under fallen debris. Occasionally someone had gone beserk.

The whole atmosphere was permeated with blind terror, and the macabre twilight was illuminated by numerous fires, the crackle of which mixed with the screams of the dying and injured. These sounded even more horrific because of the eerie overall ‘silence’.

Thousands of people scrambled, pushed, shoved and crawled across the shattered landscape in a crazed attempt to seek safety. At last we reached the foothills and the locals seemed quite pleased to see us, particularly when they discovered I was a doctor.

Immediately I set to work. Burns were the main problem and these were of two types – fire burns and flash burns. The locals used some native fern-like leaves to ease the pain-and this seemed to work. I was able to help by splinting and tying up broken bones.

Later that day the authorities began to set up first aid posts in caves which had been dug in the hillsides as air-raid shelters. Word soon spread amongst the wounded and injured and many were carried off on makeshift stretchers to these ‘hospital’ caves. Meanwhile, it began to rain. This helped to quell some of the fires.

The rain was black – which frightened everybody, including the Japanese. Not knowing until later anything at all about the effects of an atomic explosion, I seriously wondered whether we had finally arrived at Judgement Day.

An angry God was devastating the Japanese for their sins – and mistakenly including us in the holocaust.

– Taken from A Doctor’s War, printed by Grub Street Press. Available from grubstreet.co.uk – A Doctor’s Sword is out now at selected cinemas. adoctorssword.com