The Gathering proves to be well worth a visit 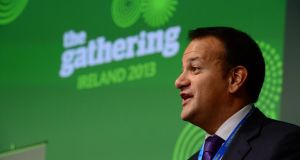 Minister for Tourism Leo Varadkar has said the project has been a “fantastic experience and success” that had helped re-establish Ireland’s reputation globally as a premier holiday destination. Photograph: Frank Miller

The Gathering initiative generated €170 million in tourism revenue and attracted up to 275,000 additional visitors, but any repeat would likely prove difficult and consideration should be given to never staging it again, a review has found.

Visits to Ireland increased by 7.3 per cent in the first 10 months of this year, with the key US market showing “double-digit growth”.

News that the year-long effort has yielded such significant results for expenditure of €13 million may surprise some. The figures are contained in a report compiled by the project itself and on the basis of independent research which examined visits linked directly to the Gathering.

The project encouraged Irish people to invite friends and relatives to visit during the year. A schedule of events was also promoted, but the project was criticised in some quarters.

However, Minster for Tourism Leo Varadkar last night said the project has been a “fantastic experience and success” that had helped re-establish Ireland’s reputation globally as a premier holiday destination.

The review compiled by project director Jim Miley, suggested the project would lose impact if re-run within five years.

One recommendation proposes it never run again. Instead the power of the “personal invite” to people overseas should be harnessed and local authority-led “community tourism” projects aided financially.