The Galway nun who witnessed the atomic bomb drop at Hiroshima

Sr Julia Canny: ‘Everywhere people lay either dying or dead from the flash of radiation’ 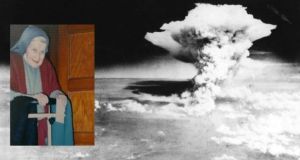 Among those who witnessed the atomic bomb which dropped on Hiroshima 70 years ago today was an Irish nun Sr Julia Canny.

Sr Julia, was originally from Clonbur, Co Galway and a late vocation having spent most of her adult life in the United States.

She was in the grounds of the convent of the Society of the Helpers of the Holy Souls in Hiroshima saying her morning prayers just two kilometres from where the bomb dropped on August 6th, 1945.

“Suddenly there was a huge bang in the sky, just above the city,” she recalled years later. “We were all thrown from our seats onto the ground. Realising that it was a bomb, we quickly picked ourselves up and made a run for cover in the direction of the convent.

“We had only just taken shelter inside the convent when the entire building began to shake and give way. We turned and rushed outside again, the convent collapsing at our heels. The convent wall collapsed before our very eyes and beyond where the wall had stood until a few seconds before lay the remains of our neighborhood.

“There was hardly a building left standing. Everywhere people lay either dying or dead, burned — I was to learn later — from the flash of radiation.”

The nuns took shelter afterwards in a house owned by the Jesuits. Prior to the Bomb being dropped, Sr Julia, who became known in the convent as Sr Mary of Saint Isaac Joques, after a Canadian Jesuit martyr, was detained by the Japanese for seven months.

She emigrated to America in 1921 and joined the Society of the Helpers of the Holy Souls in New York ten years later. In 1939 at the age of 46 she was posted to a convent in Hiroshima.

When eight nuns from the convent arrived at the Jesuit house after the bomb dropped, they discovered that some 90 refugees had taken shelter there. Sr Julia and the other nuns began to tend to their needs.

After the Americans occupied Hiroshima when the war ended, she used her fluency in English to bargain for food and medicines from American soldiers for the survivors.

She sold toothpaste on the black market to buy food for the children and was suspected by the Americans of illicit trading.

Though tens of thousands of Hiroshima residents were to perish from radiation sickness after the bomb, Sr Julia lived to the age of 94 and died in Toyko in 1987.

A fellow nun who was with Sr Julia in Hiroshima that day is still alive. Sr Theresia, a native of Japan, is 98.

She was not feeling well on the morning of August 6th, 1945 and wanted to stay in bed and recuperate, but was encouraged to get up and to say her daily prayers.

She was praying under a pine tree in the convent when the blast happened. The blast levelled the convent. When she returned to the convent, a large wooden beam had fallen on her bed. Had she stayed in bed that morning, she would have been killed.