The paper was founded 160 years ago today, with a simple vow to make a first-rate Irish newspaper 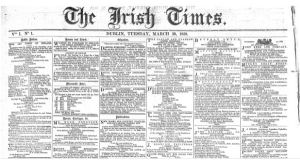 News from the House of Commons and other international political affairs dominate the first edition of ‘The Irish Times’ on March 29th, 1859.

Eduard McGaun’s age isn’t listed in the two-sentence news report arising from the inquest into his death. Readers are only told that he was a “young man”.

It was a Saturday when he fell beneath the cart he was driving along Dublin’s Sackville Street – now O’Connell Street. Three days later, on March 29th, 1859, his death became the first to be reported in The Irish Times, on the second page of the paper’s first edition.

Friday marks 160 years since the first edition of The Irish Times was published. Founded in 1859 by a 22-year-old British army officer named Lawrence E Knox, the paper was originally published only on Tuesdays, Thursdays and Saturdays. It would be 14 weeks after its debut, on June 8th of the same year, that it began life as a daily.

“The appearance of another Journal in the field on Irish politics demands a brief explanation from its projectors. It will be asked – Where is there room for this new competitor for public favour?” begins the paper’s first editorial on the second page, in a bid to justify an objective existence among the “existing babel”.

“It is quite true that every religious and political party is already fully represented in the Press,” reads the piece, “but it is also true, conversely that every Irish journal which has any circulation to boast of is the special advocate and mouthpiece of a sect or party.”

“Given the name of public men that endorse any proposed measure or movement, you can predict to a certainty, without troubling yourself at all about its merits, what reception it will meet with from any one newspaper in Ireland,” it said in its summation of Irish journalism at the time, later offering a simple vow, to “make a first-rate Irish newspaper, complete in its details, sagacious and consistent in its policy and faithfully reflecting the opinions of the most independent, intelligent and truly progressive portion of Irish society.”

Early indicators of unionist leanings are clear, with the paper’s aim to think and speak “as Irishmen, but it shall be as Irishmen loyal to the British connexion . . .”

News from the House of Commons and other international political affairs dominate the first edition. By far the most space is afforded to British parliamentary reform and debates surrounding the enfranchising of new groups of voters. Alongside the many column inches devoted to entire parliamentary statements and replies, however, are smaller news items from home and abroad.

While politicians debated in London, trouble was brewing over a clergyman’s resignation in Kilkenny West. Protestants and Catholics united in their effort to keep local rector, the Rev WB Bryan, in the parish, “and some of the parishioners having said that if he introduced any stranger they would not attend the parish church and other that they would go en masse and nail up the church doors . . .”

The Mr McGaun, while being the first reported death, was not the only one. A “melancholy accident” in Cork the previous Friday had taken the life of ship engineer George Elcock, who was discovered “quite dead floating in the tide” after going missing during his daily walk. The next report detailed the death of a three-year-old girl in Co Antrim, who had drowned in a churn of milk while taking a drink.

The most remarkable Irish news story in the edition concerned the “extraordinary case” of a man named James Joseph Brownlow, who the previous day had driven up “furiously” to Dublin Castle to confront the Lord Lieutenant. On the side of his carriage, a banner read:

The Saxon that loves us and feels for our land

To him surely Erin will stretch forth her hand

Whilst he who has driven the poor from his door

Should tremble so long as he stays on our shore

If each loves the other, how soon should she be

First flower of the earth and first gem of the sea?

Police found him to be carrying weapons – though he claimed they were useless and that he was challenging his excellency to “moral combat, not mortal combat”. He was charged with being a dangerous lunatic.

Other Irish stories from police and assize intelligence include a fortune-teller stealing a watch, an attempted assassination in Co Meath and an “unhappy affray” in Dungannon, in which a man was stabbed. Meanwhile, a series of Italian opera productions had successfully begun in Dublin’s Theatre Royal the previous night – “there could scarcely have been a better selection,” the reporter wrote.

Some high-profile non-Irish murder cases garner short mentions. One such case, an American political scandal, involved a killing near the White House. New York Democratic congressman Daniel Edgar Sickles shot the man with whom his wife was having an affair; the deceased – Philip Barton Key II – was the district attorney for Washington whose father, Francis Scott Key, wrote the lyrics of The Star-Spangled Banner. Sickles would be found not guilty, having deployed the then-unheard-of defence of temporary insanity.

The darkest historical recesses of the century are found, with mentions of slavery in areas of the world where it still occurred. One report noted a “sale” in the US, where the slave trade remained legal in many states until the middle of the following decade. The slave-owner, Pierce Butler of Philadelphia, sold 436 people at an auction in Savannah, according to the report. A story on the same page recorded a “horrible sacrifice” of hundreds of people in Africa following the death of king Gezo of Dahomey.

The first Irish Times is virtually unrecognisable in its format and layout, with classified ads populating the front of a densely-populated, four-page paper. The final lines of the first edition bear familiar items that have mostly endured: births, deaths and marriages, as well as subscription information. An item which hasn’t survived completes the edition; the signature of founder Lawrence Knox, in the bottom right-hand corner of the last page.