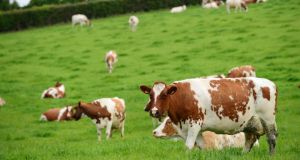 Laboratory tests have confirmed the presence of BSE in a dairy cow in Co Louth, marking the first new case of the disease in Ireland for nearly two years.

The five-year-old Rotbunt cow, a rare breed in Ireland, was part of a herd that had BSE in the early 2000s.

The Department of Agriculture said final test results from the Pirbright Laboratory in Britain confirmed the recent suspect case to be an “isolated case” of classic BSE in a single animal.

The department said all animals potentially exposed to the BSE agent that caused this incident, which include those born and reared on the birth-farm one year either side of the positive animal and her progeny, had been traced, slaughtered and excluded from the food chain.

It said all 63 cohort animals and four progeny tested negative for BSE.

The department also said the cow’s mother and grandmother tested negative for BSE and therefore “vertical transmission” was not considered a factor.

Separate tests confirmed feed on the farm did not contain meat and bone meal, which has been banned in the Republic since 1990.

“The investigation has not identified anything to distinguish this case from the other cases of classical BSE that have been seen in Ireland or elsewhere,” the department said.

“The identification of classical BSE cases after the implementation of the ban on the feeding of meat and bone meal is not unprecedented. A diminishing number of such cases have been identified in Ireland and in other countries over the years,” it said.

The finding will impact Ireland’s risk status for the disease, which was recently upgraded to “negligible risk status” by the World Organisation for Animal Health, a status only afforded to countries which are completely free of BSE.

The new case means Ireland will revert to a “controlled risk” region for another six years, representing something of a setback for industry, which had just been granted access to the US beef market and is in final-stage negotiations with China.

“Following the initial announcement, member companies have maintained close contact with customers in Ireland and abroad and have reported business as usual in international markets,” it said.

“While this single case is disappointing, it has no impact from a beef trading perspective. Ireland’s recent successful market access to the US and Japan as well as China was secured as a result of the ‘control risk status’ that Ireland continues to hold and which has served us well in international markets,” the group added.

Irish Farmers’ Association Eddie Downey said: “Consumers can be re-assured about the robustness of the food safety controls in place in Ireland. This and the high quality of Irish food has rightly reassured export markets from all over the world.”

Isolated cases of BSE are not uncommon, however, with department figures showing there was one confirmed case in 2013 and three the previous year.

BSE in the food chain has been linked to cases in humans of variant Creutzfeldt-Jakob disease.