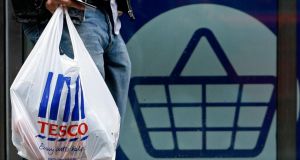 Tesco’s real problem comes with a German accent. It is struggling to come to terms with the threat posed by Aldi and, to a lesser extent, Lidl. Photograph: Luke MacGregor/Reuters

Tesco’s pre-eminence in the Irish supermarket sector looked to be untouchable in the autumn of 2012. It commanded 28.6 per cent of the market, seven points clear of Dunnes Stores in second place and its aggressive pricing policies combined with the proliferation of its stores across the State had seen its share increase every quarter for more than two years. It has been downhill ever since.

Each successive quarter since that high watermark has made grim reading for its senior executives and unless it does something to arrest the decline, it is in real danger of losing its number one spot to Supervalu before the end of the summer with less than 1 per cent now separating the two retailers.

Supervalu has played a canny game in recent years. Its acquisition of the troubled Superquinn was inspired and allowed it to increase its market share by over 5 per cent at the stroke of a pen while its shift towards own-brand goods – with more than 1,000 product lines now carrying its name – has allowed it to cut prices and capitalise on Irish consumers’ realisation that branded doesn’t always mean better.

It has also played its green card effectively and all its advertising and in-store promotions continue to make much of the fact that its stores – many of which are owned by franchisees – are more embedded in local communities than Tesco, or the German discounters Aldi and Lidl.

Discounters
But a look at the numbers shows that while Supervalu has grown its market share over the past two years, the growth has been modest and is not behind Tesco’s more dramatic decline.

Its real problem comes with a German accent. It is struggling to come to terms with the threat posed by Aldi and, to a lesser extent, Lidl. Over the past three years the German discounters have captured a combined 3.8 share points from the competition, and have grown sales by 37 per cent in an overall grocery market which has grown by just 1 per cent.

Aldi now commands 7.9 per cent of the total grocery spend with Lidl 0.4 per cent behind it. With each passing month, consumers are being won over to the once unfamiliar brands found on the shelves of both retailers.