Slogans chanted: ‘Enda Kenny not a penny’ and ‘From rivers to sea, water should be free’ 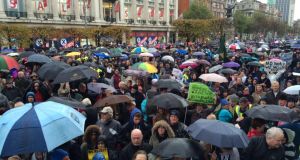 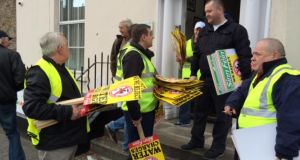 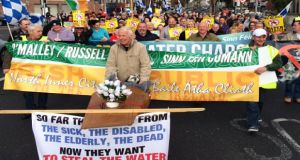 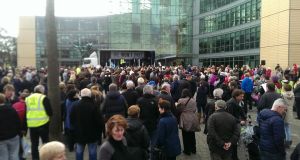 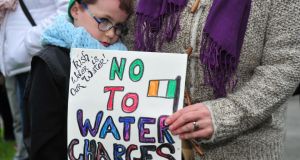 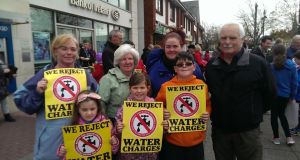 The Simpson family in Blanchardstown. “People have had enough now, they’ve paid their way,” Debbie Simpson said. “Normally the Irish will roll over but they’re not rolling over on this one.” Photograph: Pamela Duncan 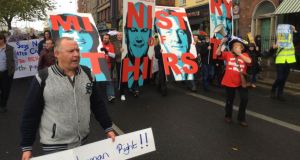 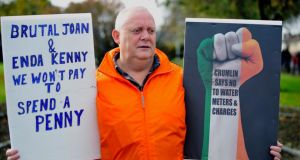 Thousands of people have taken to the streets in towns, cities and villages across the country to protest over water charges today.

Tens of thousands have gathered at the GPO in Dublin city centre, as a result O’Connell Bridge is blocked and O’Connell street is closed.

The crowds lined the north and south quays of the Liffey before continuing on to the GPO on O’Connell Street, chanting “Power to the people” and “No way, we won’t pay”.

Gary Hearns travelled to the capital from Enniscorthy because he said he was “sick and tired of the harsh measures being brought against the people of Ireland.”

Irene Murray from Dublin City said “we The first of the anti-water charge protests got underway at 11am .

shouldn’t have to pay for our water twice over. We’ve already paid for it through our taxes.”

She said the protest would send a message to the Government that the people want water charges dropped. “A lot of men and women with children, they just can’t take anymore,” she said.

By 3.20 this afternoon the space on O’Connell Street between the Spire and Abbey street was densely packed with protestors.

The crowd of between two and three thousand included 150 marchers from Donnybrook as well as protesters from the Iveagh Trust, Ringsend, York Street and Harold’s Cross. They were addresed by Sinn Fein councillor Chris Andrews, People Before Profit councillor Sonya Stapleton and UCD Sociologist Kieran Allen.

One of the first protests took place in Tallaght, Dublin this morning the voices of the water protestors spanned the generations.

“No way we won’t pay,” a young boy chanted as his mother led him by the hand through the throngs of people who gathered at St Mary’s Dominican Church on the village’s main street before 11am.

The Tallaght protest of hundreds, was one of the first to take place in Dublin, stretched from the traffic lights on the main street back to the Dragon Pub and the crowd was giving full voice to its opposition to the introduction of water charges.

Other slogans were: “Enda Kenny not a penny.”

Water bucketed down on some 1,000 protesters as they marched from Clondalkin this afternoon under a canvass of umbrellas on their way to converge with another group of protesters who began their march in Lucan.

“Extortion by extortionists,” said one. “From the river to the sea, Irish water will be free,” read another. But most bore one simple message: “We won’t pay”.

Dave Eustace echoed the voice of many who were taking part in protests throughout Dublin and Ireland: water charges were “a step too far”. “This is the issue that woke me up,” he said.

“Water tax is an unjust tax,” she called through the microphone, the crowd echoing her.

By 1.30pm gardai patrolling the march estimated that there were 2,500 people in attendance, however that figure was set to swell as smaller protests from surrounding areas and housing estates making their way to the location in Blanchardstown Town Centre.

Ms Coppinger said the protest “is only building now. This is definitely going to be the biggest march in Blanchardstown in over a decade”.

In Dun Laoghaire, Co Dublin this afternoon at least 1,500 people marched. Among the chants were “from rivers to the sea water should be free.”

“I’ve never seen a protest like it, we had a 5,000 people on the streets here,” Claire Daly TD said from Swords, Co Dublin. People feel they have the Government “on the run” and there is a “real sense of people power,” she told RTE Radio. Swords is a “quiet sleepy suburban area” she said.

Dozens of marches took place across the country.

Thousands of anti water charge protesters carried a coffin through the streets of Tullamore in Co Offaly this afternoon.

Despite intermittent and at times heavy downpours, gardai said some 2,000 attended the protest. Marchers carried a coffin to symbolise the death of Irish water.

More than 3,000 anti water demonstrators have converged on Bedford Row in Limerick city centre to protest over water charges.

Limerick’s main thoroughfare O’Connell Street was closed to traffic because of the amount of people who have turned out for the second time in a week to highlight their anger over the water charges.

Pouring rain didn’t deter the estimated 3,500 people taking part in today’s protest, which saw protestors converge on the city centre from four separate meeting points dotted outside the city centre and its suburbs.

One of the groups marched four kilometres from Westbury in Co Clare. Loud chants of ‘Enda Kenny, Not a penny!’ was heard from underneath the sea of umbrellas as protestors called on Fine Gael to “look up high and see the water falling from the sky”.

In Galway protesters have been mobilising mainly through Facebook. Public meetings organised by the We Won’t Pay campaign and Anti-Austerity Alliance helped to drum up support for today’s protest which started at the Spanish Arch at 1pm.

An estimated 4,000 people took to the streets in Sligo where the government was warned that minor concessions would not “fool people into accepting water charges”. During a march through the centre of town , much of the crowd’s anger was directed at the Taoiseach, with repeated chants of “Enda in your ivory tower, this is called people power” and “Enda Kenny, not a penny”.

The protest started at at the Horan Centre in Tralee, Co Kerry this afternoon. It followed on from a similar protest organised by a number of trade unions, Sinn Féin and Right2Water last weekend which attracted a crowd of up to 1,000.

A crowd of more than 7,000 turned out in Co Donegal to send a message that locals will not pay water charges. The crowd marched from the Port Roundabout to Market Square in Letterkenny where speakers were met with enthusiastic rounds of applause.

The gathering, which included families and children, was one of the biggest protest marches in the area in living memory.

Householders in Boyle, Co Roscommon, who are still contending with “boil water” notices because of contamination were urged to support today’s protest, which began at the Royal Hotel car park at 1.30pm.

A spokesman for the Garda press office said the office had received no reports of any arrests or public order incidents at today’s protests thus far.