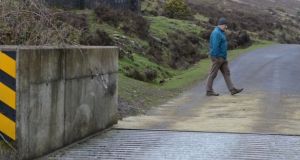 The scene near the Nine Stones scenic area in Borris, Co Carlow where a car crashed in the early hours of Sunday morning. Photograph: Alan Betson

A 16-year-old boy killed when the car he was driving struck a wall on a mountain road at the weekend has been named as Eamon Kavanagh.

There were four other teenagers in the vehicle at the time of the crash in Co Carlow, all of whom were injured.

One of the four injured teenagers was in critical condition in the Mater hospital, Dublin, on Sunday night having been transferred there when his condition deteriorated.

The deceased, a third-year secondary school student from Myshall, Co Carlow, was driving near The Nine Stones, Mount Leinster, Borris, when his car hit a concrete wall.

The mountain road the teenager was driving on at about 5am on Sunday featured a tight section where large pre-cast concrete slabs had been put in place to create walls on both sides of a cattle grid in the road.

The grid and precast concrete slabs combined to create a pinch point between parcels of land so livestock cannot pass through.

Garda sources said conditions were foggy in the area in the early hours of Sunday. While the crash was still under investigation, it appeared the car went out of control at speed as the vehicle was passing through the pinch point on the narrow road and hit the concrete wall.

The teenager who died is the son of a farming couple on whom terms of imprisonment were imposed by the courts last Friday in a high-profile animal cruelty case.

James Kavanagh (48) was given a three-year prison term after pleading guilty to 30 counts of causing or allowing animal cruelty on his property at Raheenleigh, Myshall in April, 2015.

The charges related to 63 different animals. He was disqualified from owning horses or dogs for life.

Jennifer Kavanagh was given a 12-month suspended sentence after she admitted 30 counts of allowing animal cruelty on the property, relating to 15 specific animals. She was banned from owning dogs or horses for 15 years.

Gardaí were on Sunday night conducting a criminal investigation into the death of the couple’s son Eamon in the Sunday morning crash.

As he was aged 16, he should not have been driving and the Garda inquiry is examining the ownership of the vehicle he was in and how he came to be behind the wheel.

He was pronounced dead at the scene and his body has been taken to Waterford hospital.

“The four other male occupants of the car, all late teens, were taken to St Luke’s Hospital and Waterford University Hospital, one believed to be in a serious condition,” a Garda spokesman said. One person was later transferred to the Mater hospital in a critical condition.

“I’m sure at this stage the family are devastated and all they want is some privacy to try to come to terms with this tragedy,” Fine Gael councillor Tommy Kinsella said.

The road was closed to facilitate an examination by Garda forensic collision investigators and local diversions were in place early on Sunday morning.

However, the crash scene was cleared by lunchtime. The location of the crash is a scenic road at the side of Mount Leinster.

One local councillor who was returning from Dublin at about 12.30am said conditions in the area were foggy at that time and that visibility was very poor.

1 Coronavirus: People in close contact with Belfast patient identified
2 Storm Jorge on track to hit Ireland amid flood and wind warnings
3 Coronavirus: Belfast patient passed through Dublin Airport before travelling to Northern Ireland
4 What should you do if you think you might have coronavirus?
5 Cork grandmother goes on trial for felling Sitka spruce trees
Real news has value SUBSCRIBE