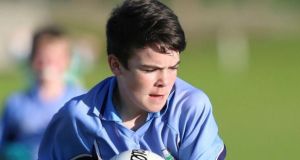 Tributes have poured in for Oisín McGrath (13), who died after being injured while playing football on his lunchbreak

Teachers and fellow pupils of a teenage boy who died after he was injured during a playground incident have said they are profoundly saddened.

Oisín McGrath (13) was a pupil at St Michael’s College in Enniskillen, Co Fermanagh, and was hurt while playing football during his lunch break on Monday.

He died on Thursday and his parish priest said his organs were donated to help five people.

A 17-year-old boy was arrested and later bailed pending further police inquiries into what happened.

Chairman of the board of governors at St Michael’s, Msgr Joseph McGuinness, said: “The entire school community is deeply shocked and saddened to learn of the passing of Oisín, a Year 9 student.

“Oisín was a very bright and talented student with a great love of sport.”

The keen Gaelic footballer from the village of Belcoo in Fermanagh was treated in the Royal Victoria Hospital in Belfast.

St Michael’s is a Catholic boys’ grammar school with 700 pupils.

Msgr McGuinness added: “Oisín was a lively, out-going boy who was very popular with both staff and students and they have been profoundly saddened by his death.

“Our hearts go out to Oisín’s parents Nigel and Sharon, his sisters, grandparents and wider family circle. They are foremost in our thoughts and prayers at this sad time.”

The school has been providing counselling and support.

Oisín represented the school as part of its Gaelic team and was a key player for his GAA club in Belcoo. He also played soccer for Enniskillen Athletic and was a leading member of St Michaels’ Ulster School’s competition-winning cross-country squad.

His funeral will take place in Belcoo on Sunday.