Taoiseach faces calls for Level 2 ‘with tweaks’ after lockdown ends

Taoiseach Micheál Martin has told the Dáil that the Government is targeting a return to Level 3 Covid-19 restrictions by December 1st. Video: Oireachtas TV 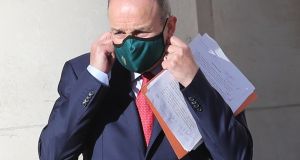 Taoiseach told the Dáil on Wednesday that he would like to get back to Level 3 restrictions for December 1st. Photograph: Niall Carson/PA Wire

Families should be given clarity over Covid-19 restrictions ahead of Christmas, while the risk of ongoing economic and social damage from lockdowns needs to be guarded against, meetings of the two largest Government parties have heard.

As part of a wide-ranging discussion of Covid-19 strategy at the Fianna Fail parliamentary party, contributions were heard on the need for clarity over what restrictions would be in place over Christmas, sources said.

Cormac Devlin, the Dun-Laoghaire Rathdown TD, said that subject to public health advice, Level 2 “with tweaks” should be introduced, allowing people to travel home for Christmas, as well as indoor hospitality and religious services to be accommodated.

Taoiseach Micheal Martin told the Dáil earlier on Wednesday that he would like to get back to Level 3 restrictions for December 1st. “That was a target,” he said.

John Lahart, the Dublin South West TD, told the party meeting that Level 3 restrictions would be demoralising for people.

He also argued that some in the hospitality trade had not worked since March or late September, and that the prospect of these people heading into Christmas with Covid subsidy payment alone was not something that the Government should “easily accept”

The meeting also heard that there needed to be as much support as possible for the hospitality and retail sectors during the Christmas period, as it offered an opportunity for merchants to make up ground lost during the year.

Meanwhile, TDs and Senators also warned that if the hospitality sector wasn’t permitted to open up around Christmas, there was an increased risk of house parties, which have been blamed for being a major driver of infection prior to the reintroduction of stricter measures. The Fianna Fáil parliamentary party meeting heard lengthy contributions on the need to get a message of hope to the public that the sacrifices they had made during lockdown would be worthwhile.

Earlier, the Fine Gael parliamentary party heard of the risk of economic and social damage caused by going into and out of lockdowns.

The party agreed a motion on Wednesday night to seek time in the Dáil and Seanad on planning for the lifting of Level 5, so that ideas “for this next phase of managing the pandemic” be heard “as soon as possible”.

Tánaiste Leo Varadkar spoke in favour of the motion, brought by former Minister for Housing Eoghan Murphy. Mr Murphy is understood to have told the meeting that the country couldn’t keep going in and out of lockdown.

The motion was seconded by Sean Kyne, and also supported by Fine Gael parliamentary party chairman Richard Bruton, as well as Kildare North TD Bernard Durkan. Mr Bruton is understood to have told the meeting that the current period of lockdown must be used to ensure all tools are optimised for once restrictions are lifted, in order to minimise the degree to which harsher measures may have to be reintroduced.

Dublin Mid-West TD Emer Higgins also spoke in favour of the motion, and called for more information to be made available to different industries so they could better understand whether or not they should open in the various stages of the State’s lockdown plan.

At the Fianna Fail meeting, Cavan-Monaghan TD Brendan Smith said there should be an all-island dimension to dealing with Covid, and that there was a need to have restrictions north and south of the border as similar as possible, while Cork North-Central TD Pádraig O’Sullivan raised the issue of public worship.

The Fine Gael parliamentary party was also warned by party leader, Mr Varadkar, that they should not make any comment on the row between Supreme Court Judge Seamus Woulfe and the Chief Justice, Frank Clarke, who has told the former Attorney General he should step down.

The issue was also raised at the Fianna Fáil party meeting, where Sligo-Leitrim TD Marc MacSharry told colleagues he felt the issue was more the responsibility of the judiciary than the oireachtas to address. He said that a process had been established under Susan Denham, after which followed what he described as a “rather contradictory” letter from a senior member of the judiciary expressing a personal opinion which differed from Denham’s report.

The Fianna Fáil meeting also heard from John McGuinness, the Carlow-Kilkenny TD, who called on the Government to secure capacity with shipping companies for road haulage to the EU, while Fiona O’Loughlin, Jackie Cahill and Christopher O’Sullivan raised Brexit issues regarding the agriculture and food production industries.