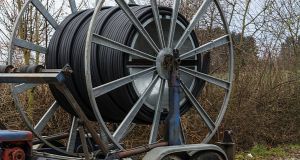 Over the next seven years, 147,000km of fibre will be strung on existing Eir-owned poles, said Minister for Communications Richard Bruton in the Dáil. File photograph: Getty

Taoiseach Leo Varadkar has insisted that giving a company such as the ESB responsibility to deliver high-speed broadband “won’t work as quickly and could cost even more” than the current state investment of €3 billion.

Mr Varadkar said that the State’s interests in the deal with Granahan McCourt – which earlier this week was chosen as the preferred bidder for the largest single contract in the history of the State – was protected, stressing the investment is capped at €3billion.

“Anything above that falls on the company,” he said.

Speaking on the fringes of an informal EU summit in Romania, he said he was disappointed to see Fianna Fáil arguing “an idea that we considered and we know won’t work as quickly and could cost even more, which is this idea of the ESB agency doing it”.

“We wanted to make sure there wasn’t an alternative that would be quicker, that would be cheaper or would deliver 100 per cent coverage – and there isn’t. We’ve satisfied ourselves that there isn’t a Plan B.”

Fianna Fáil’s decision in 1999 to privatise Telecom Éireann meant there was no choice today but to rent access to the poles and ducts now owned by its successor, Eir, said Mr Varadkar.

“This new infrastructure is essentially piggy-backing along that infrastructure that was privatised 20 years ago. One of the ideas that we toyed with was renationalising Eir.

“Just to do that alone would take years and we would have to compensate the shareholders with many billions of euros and that’s before we’d even start providing new fibre, so that wasn’t a realistic decision,” he said.

However, criticism of the Government’s decision to proceed with the current plan for the roll out across the State continued unabated. Sinn Féin deputy leader, Pearse Doherty said officials in the Department of Communications were guilty of “cooking the books” when they produced a cost-benefit analysis.

Department of Public Expenditure officials had dismissed the figures from the Department of Communications as “not credible”, documents released on Wednesday indicated.

“They’re saying that they were cooking the books, that the bidder doesn’t have the capacity and that there’s no incentive for the bidder to deliver after a number of years if further losses are incurred,” Mr Doherty told t he Dáil.

However, Tánaiste Simon Coveney said the Government had looked at all options available and had chosen high-speed fibre over mobile, or wireless because that is deemed the best choice today.

Over the next seven years, 147,000km of fibre will be strung on existing Eir-owned poles, Minister for Communications Richard Bruton told Opposition TDs during sharp exchanges in Dáil.

On Thursday, The Irish Times reported that the cost of the plan, including private investment, is now expected to exceed € 5 billion.

Mr Bruton said the €5 billion figure would be the cost over a 25-year period.

Fianna Fáil TD Timmy Dooley said Granahan McCourt will invest no more than €400 million. In reply, Mr Bruton said: “I do not want to confirm anything ahead of the finalising of contracts.”

On Wednesday, Minister for Agriculture Michael Creed provoked surprise when he told Clare FM that Granahan McCourt would invest no more than €200 million, with the rest coming in charges paid by broadband suppliers.

Questioned in Romania, where he was attending an EU summit, Mr Varadkar said Granahan McCourt’s contribution is commercially sensitive and has to remain confidential at least until the contracts are signed.

“Bear in mind the company will provide money in lots of different ways. There is the equity investment, there’ll also be working capital and there will be the money that the company raises from user charges,” he said.

“If this falters I don’t honestly believe that we will ever get high-speed broadband into rural Ireland. I believe for generations to come we’ll be talking about haphazard services – it will be a Band Aid situation, for a few years it will be good and then it will drop off. It will become a big political issue again.”

The timing is unfortunate, but not an election ploy, he believed. “This was ready to go last October, this is not about Netflix for people in rural Ireland, that perception is being put out there.”