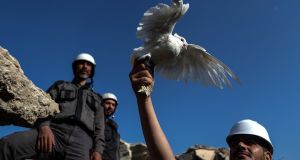 The Tipperary Peace Convention has awarded its annual prize to the Syrian Civil Defence, also known as “the White Helmets”.

The group of 3,000 volunteers takes part in rescue operations in Syria and is said to have saved more than 100,000 people. More than 190 of its members have lost their lives.

The award is “a testament to the enormous bravery and courage shown” by the White Helmets, the convention said in a statement.

The convention was founded in 1983 with its original aims to “promote the concept of peace through music and discussion” and to provide an open forum for the discussion of current peace-related issues.

Previous recipients of the award include former US secretary of state John Kerry, former president Mary McAleese and it was jointly awarded to the late US senator Ted Kennedy and US ambassador to Ireland Jean Kennedy Smith.

Fine Gael Senator Martin Conway said: “These ordinary Syrians – once students, accountants or engineers, men and women, young and old – have taken upon themselves hazardous work of saving lives in the most challenging and dangerous circumstances – and they are estimated to have saved over 100,000 to date.

“Every day, when bombs, shells and explosives are dropped on schools or hospitals, when civilians are tragically hurt, these brave volunteers rush towards the danger to help their fellow citizens.”

He added: “Their motto, inspired by the Koran is: ‘To save a life is to save all of humanity’. It is a reminder to all of us that individual actions, local actions, can reverberate much more widely than we might dare imagine.”

The White Helmets received the award on Wednesday evening at Ballykisteen Hotel in Tipperary.