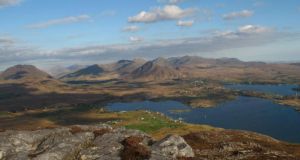 A 57-year-old male climber was found dead in the Twelve Bens mountain range at Connemara in Galway on Saturday afternoon. Photograph: Tony Doherty

A mountain climber and a swimmer died in separate incidents over the weekend.

A 57-year-old male climber was found dead in the Twelve Bens mountain range at Connemara in Galway on Saturday afternoon. Galway Mountain Rescue Team responded to an emergency rescue call to the mountain range at 5pm.

The team members set out to the Inagh Valley as the rescue helicopter searched to find the body of the man who had fallen.

Gardaí said the man was taken to University Hospital Galway and pronounced dead. A postmortem will be carried out in the coming days.

In Co Clare, a man died yesterday despite the attempts of swimmers at one of the country’s busiest beaches who pulled him from the water.

The alarm was raised shortly after 3pm at Lahinch when the man in his 70s, believed to be from Broadford in east Clare, collapsed in front of swimmers and other beach goers.

The pensioner was seen standing in shallow water before he collapsed suddenly. Onlookers ran to his assistance and quickly pulled him from the water onto the beach.

Local lifeguards were alerted and reached the unconscious man in less than a minute. They used a defibrillator in an effort to resuscitate him, however he was pronounced dead at the scene by a local doctor.

The Doolin unit of the Irish Coast Guard was alerted and requested to respond to a report of a man in difficulty at Lahinch beach.

An ambulance from nearby Ennistymon and a rapid response advanced paramedic unit from Ennis also rushed to the scene.The man’s body was removed to University Hospital Limerick where a postmortem examination is expected to be carried out today.