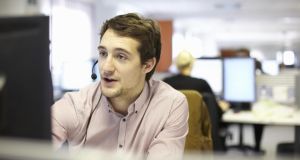 The Millward Brown poll found that 70 per cent of those surveyed in the South and 54 per cent in the North favour services in Irish being provided to those who wish to avail of them. Photograph: Getty Images

A majority of citizens surveyed across Ireland favour the provision of State services in Irish for those who wish to choose them, according to the results of an opinion poll released this week.

The poll, conducted on behalf of Conradh na Gaeilge by research company Millward Brown, asked respondents whether they agreed or disagreed with the following statement: “Services provided by the State should be made available through Irish for those who wish to use them.”

It found that 70 per cent of participants in the South believe services in Irish should be provided with 13 per cent opposed.

In the North, 54 per cent of those who were asked a similar question were in favour of services in Irish being provided with 26 per cent opposed.

Among other topics covered in the wide-ranging poll was respondents’ understanding and ability to speak Irish.

In the South, 26 per cent of participants agreed with the statement “I am confident in my ability to speak Irish,” compared to 5 per cent in the North.

Commenting on the poll findings, Cóilín Ó Cearbhaill, president of Conradh na Gaeilge said the results “are of historical significance”. He said they show the degree of cross-community support for the language both north and south of the Border.

General Secretary of Conradh na Gaeilge Julian De Spáinn, said the findings highlighted how essential it is to protect language rights. Calling on both Irish and British governments to provide state services “of equal quality” in Irish to those that wish to use them. He also called for an end to the derogation of Irish as an official working language at the EU.

Minister urges objectors to Cork flood relief plan to stop legal action 21:18
Man held after gardaí seize cannabis worth €800,000 in Dublin 21:10
People who throw house parties can be fined €1,000 and jailed for up to a month under new proposals 21:04
Extra day to Dáil debate on extending State’s powers during pandemic 20:27
Schools should not reopen after midterm unless safety improves, say unions 19:34

1 One hundred Irish retailers for all your online Christmas shopping
2 People who throw house parties can be fined €1,000 and jailed for up to a month under new proposals
3 School ordered to reopen after closing due to Covid-19 fears
4 Girl delivered early from terminally ill mother settles case for €900,000
5 Extra day to Dáil debate on extending State’s powers during pandemic
Real news has value SUBSCRIBE