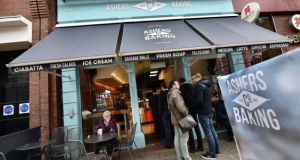 Ashers’ Bakery in Belfast refused to bake a cake with a pro-gay marriage slogan for Gareth Lee in 2014. Photograph: Charles McQuillan/Getty Images

The highest court in the UK will hear the case of a Christian-owned bakery in Belfast who refused to make a cake with a pro-gay marriage slogan.

Ashers’ Baking Company are challenging a ruling that their refusal to make a cake iced with the slogan “Support Gay Marriage” was discriminatory.

The hearing will be the first court proceedings in Northern Ireland to be live streamed.

Previously the company was ordered to pay limited costs in the landmark legal dispute with customer Gareth Lee.

Lord Chief Justice Sir Declan Morgan said: “This is a case about a £36 cake and a £500 claim for damages. The costs should be proportionate to the issues involved.”

In October, 2016, the Court of Appeal upheld a finding that the family, who run Ashers’, directly discriminated against Mr Lee due to his sexuality. He sued after his order was declined at the company’s Belfast city centre shop in May 2014.

Mr Lee had requested a cake depicting Sesame Street characters Bert and Ernie below the motto ‘Support Gay Marriage’ for an event to mark International Day Against Homophobia.

Management at the bakery refunded his money for the order because the message went against their Christian faith. The family insist their problem was with the cake and not the customer.

Last year Belfast County Court held that the bakery had unlawfully discriminated against him on grounds of sexual orientation and religious belief or political opinion. The firm was also ordered to pay £500 compensation to Mr Lee.

Lawyers for the McArthurs appealed the ruling, arguing it would have been sinful for them to complete the order.

Mr Larkin backed the McArthurs’ case by contending that it was wrong to force them to express a political view in conflict with their faith.

Counsel representing the Equality Commission insisted the family’s entitlement to express religious beliefs should not “trump” Mr Lee’s rights. He told the court that the bakery’s objection to using the word gay meant there was direct discrimination.

Sir Declan, sitting with Lord Justice Ronald Weatherup and Lord Justice Reginald Weir, held that the company cannot provide a service that only reflects their own political or religious message in relation to sexual orientation.

The Lord Chief Justice pointed out that the McArthurs had not been asked to support gay marriage. In his ruling in October he said: “The fact that a baker provides a cake for a particular team or portrays witches on a Halloween cake does not indicate any support for either.”

Following further submissions on Friday on attempts to take the case to London, Sir Declan confirmed: “We refuse leave to appeal; we consider the matter should be properly left to the Supreme Court.”

Awarding costs of the appeal to Mr Lee, he stressed that the amount was being limited to the county court scale.

1 Bobby Storey: The IRA's planner and enforcer who stayed in the shadows
2 Is Donald Trump losing his touch?
3 Unflappable ‘Dr Tony’ became public face of Covid-19 crisis response
4 Q&A: How close are we to having a Covid-19 vaccine?
5 Transgender Cork farmer (65) surprised at positive response to telling her story
Real news has value SUBSCRIBE