The current and past pupils of Willow Park and Blackrock College hope to raise €60,000 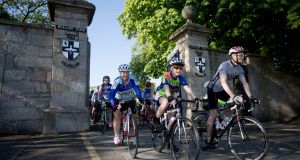 Willow Wheelers set off on their 29th annual 100-mile cycle, from Blackrock to Kinnegad and back again. Photograph: Tom Honan. 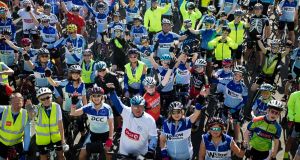 More than 250 cyclists took part in the Willow Wheelers fundraising event for projects in the developing world. Photograph: Tom Honan

The weather gods were smiling on the Willow Wheelers on Sunday morning as more than 250 cyclists set off on a 100-mile trip from Dublin’s Blackrock College to Kinnegad and back again in near perfect conditions.

It was the club’s 29th annual charity cycle and once again the event was aimed at raising funds for water, health and education projects in Africa, South America and southeast Asia.

Aside from one broken wrist following a spill less than 5km into the event, a few sunburned faces and a lot of encounters with potholes, which organisers said had been left behind by recent heavy snowfalls, the event passed off without mishap.

The Willow Wheelers, established in 1989 by Christy McDaid, is made up largely of current and past students from Willow Park School and Blackrock College. The money raised goes to Irish missionaries working in deprived areas of the world who need funding for local projects.

“We are hoping to raise €50,000-€60,000 this year which will go to projects in the developing world, with a large portion of it this year going to Ethiopia,” Mr McDaid said.

“The weather this year was definitely one of the things that participants were remarking upon,” he said. “We have done this cycle in high winds and driving rain in the past but this year it has been absolutely perfect.”

Meanwhile, a man in his 50s died suddenly during a charity cycle in Co Mayo on Saturday.