The sun came out for Ladies day at the Discover Ireland Dublin Horse Show as did the short sleeves and ice-cream cones. Style was everywhere as hundreds entered the Best Dressed Competition. Video: Bryan O'Brien 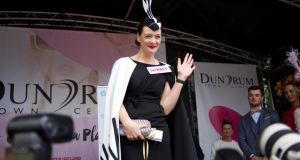 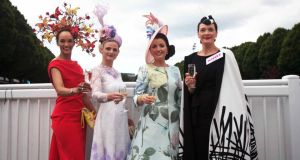 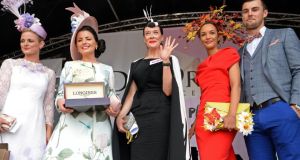 When you are a top class designer who has dressed Oscar nominees and ambassadors, winning best dressed lady cannot be that much of a stretch.

Yet Laura Jayne Halton, from Maynooth, Co Kildare, was visibly shaking after having won the big prize on Ladies’ Day at the Discover Ireland Dublin Horse Show at the RDS.

Her monochrome dress and cape, topped off with a hat, saw her chosen ahead of 500 other entrants in the best dressed category.

Ms Halton said that the outfit, which she designed herself, took her until 2am this morning to finish.

Ms Halton has previously dressed the Oscar-nominated producer Fodhla Cronin O’Reilly and the State’s first female ambassador to the US, Anne Anderson.

However, she is used to others being the focus of her creations.

“These things, I don’t make a point of going to many of them. It’s all a bit mad,” she said, in relation to the horse show.

The hat, with its three white quivering arrows, was improvised at the last minute when she realised she had nothing else to wear with her outfit.

“I do most of the work myself. The ethos of my approach to fashion is to try and do timeless pieces.”

Understated it might have been, but one could not say the same for Linda Malone, whose striking hat was a riot of red and yellow butterflies.

She deservedly won the most colourful outfit prize.

Ms Malone, from Athboy, Co Meath, wore a hat she commissioned from a Los Angeles milliner, with a brief to “go as crazy as you like”.

Her dress was from Kevan Jon and her shoes were from Asos.

“I have a quirky sense of fashion. I’m just here to admire everyone else’s style.”

He wore a three-piece suit with a dicky bow, in the style of UFC fighter Conor McGregor .

“He is an inspiration. He would be inspiring many lads of my generation with his checks and tweeds. He’s given us good business anyway,” said Mr Bates, who works in a suit store.

Sarah Cass, from Kilkenny, won the Longines Elegance is an Attitude award, wearing a hat by Leitrim milliner Jennifer Wynne, herself a winner of the best dressed lady competition at Cheltenham.

Judge Pippa O’Connor praised the sense of adventure of the 500 men and women who took part.

“Irishwomen are such amazing dressers. They are not afraid to take risks,” she said.

Her brother, showjumper Cian O’Connor, declined to appear in the best dressed enclosure.

“Pippa texted me this morning and asked me to come down. I’d be too embarrassed.”

He was in a more serious mood, ahead of the Nations Cup, which is taking place on Friday in front of a home crowd.

“When the bell goes, you’re on your own. The atmosphere is electric.”

Nevertheless, O’Connor cheerfully admits that he would happily forsake winning the Aga Khan trophy in exchange for Ireland securing a place in the Olympic games in Rio next year.

“The Olympic Games is where it is at. This serves a purpose as a final trial if you like.

“It’s absolutely crucial we don’t risk any of the horses here. The only goal is getting to the Olympic Games.”