Over 6,000 secondary school students representing every 2nd level school in the state have received the National Flag for their schools at a special State Ceremonial event hosted by President Higgins in Croke park. Video: Bryan O'Brien 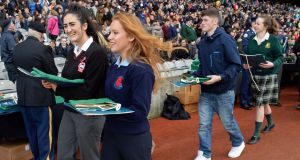 Thousands of secondary school pupils have been presented with copies of the national flag and the Proclamation at a special ceremony at Croke Park in Dublin in advance of the Easter Rising centenary commemorations.

Every secondary school in the Republic was represented in the stadium yesterday in what was the biggest public event to date to mark the centenary.

The students formed two long lines. One line collected a copy of the Proclamation, while the other the national flag.

Barnes said it was a proud moment for him both to have received and to distribute the flags.

President Michael D Higgins told the gathering the Rising had been a “stunningly ambitious act of imagination”.

Many of the rebels had been actors and therefore had a sense of the dramatic, the President told the 6,000 students and teachers present.

Students were told how Thomas Meagher, one of the Young Irelanders, had modified the symbol of revolutionary France to suit the Irish context. It had first been flown in Waterford in 1848.

An actor playing Meagher read his words: “The white in the centre signifies a lasting truce between Orange and Green and I trust that beneath its folds the hands of Irish Protestants and Irish Catholics may be clasped in generous and heroic brotherhood.”