The Co Tyrone town remains troubled by its past, even as it faces an uncertain future 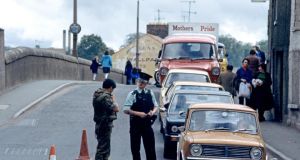 On a sunny day, all of Ireland’s views are beautiful. Stand in Springhill Park in Strabane and look down over the town, and the eye is drawn to the chapel spires interspersed between the rooftops, the blue of the River Mourne, and the town’s new footbridge.

Opened almost two years ago and costing £3.2 million (about €3.5 million), the boat-shaped bridge exudes confidence in the future of this Co Tyrone town. However, plenty of the graffiti on the town’s walls carries reminders of Strabane’s troubled past.

An image of two masked men lying on the ground, one ready to fire a machine gun, the other holding a walkie-talkie, appeared on the gable end of a house in Springhill Park a week ago.

“Unfinished business,” the caption reads - a direct reference to the war which dissident republicans believe is still ongoing, 20 years after the IRA called its second, permanent ceasefire in 1997.

Independent councillor Paul Gallagher, who lives a few houses away from the mural, condemns it.

“What is the unfinished business? It’s putting a pipe bomb under a single mother, a vulnerable woman’s car on a Sunday morning.”

He is proud to call himself a dissident republican - but, he stresses, one who is opposed to violence. Like all dissidents, he is opposed to the Belfast Agreement - which he regards as cementing British rule over the North - and instead advocates “a republican socialist position that’s on the left, that’s an alternative to the current status quo”.

From a republican family, Gallagher has been arrested “on numerous occasions”, and previously stood for election for the Irish Republican Socialist Party, which has links to the INLA.

“When people hear about dissidents they hear about someone getting shot up an alleyway. That’s not what republicanism is about.

“The war’s over . . . Now it’s about republican socialist values,” says Gallagher. “And about trying to bring others into that space and convince people dissidents can be non-violent.”

It’s a distinction that many fail to appreciate. Statistics from the Police Service of Northern Ireland (PSNI) show that Derry and Strabane had more bombing incidents than anywhere else in Northern Ireland last year.

In March, a bomb exploded in Strabane near a police patrol, an act described by local community leaders as “madness”.

Such incidents display both the presence and the intent of dissident republicans, and underline the hold they continue to exert over many working-class nationalist neighbourhoods.

“Some of them are using republicanism for criminality,” says Sinn Féin councillor Brian McMahon. “Some of them are into fiefdoms and kingdoms in their small areas, and they’re playing absolutely into the hands of British military intelligence.”

Earlier this year, more than a thousand people - many from all over Ireland - watched a 30-strong dissident republican colour party dressed in paramilitary uniforms and wearing berets and sunglasses parade through the Bogside in Derry ahead of an Easter commemoration.

Gallagher estimates that there are less than 10 dissidents in Strabane willing and able to be violent.

“It’s easy to sit in front of the fire and think, I’m a big republican, but the reality - I’m not sure, it wouldn’t be double figures. Even if they amassed to 40, I would doubt the potential in some of them to put together an effective campaign. Some of them speak to me and some of them don’t speak to me, and some of them would be a bit lippy if you’re canvassing and knock their doors.

“They love that, coming to the door with the chest out and saying, ‘Naw, I’ll not be voting’, but still I wouldn’t pass their door, I’ll give it a rapping.”

Today, Strabane remains one of the most deprived parts of Northern Ireland, with high unemployment and little business investment. The town has seen its most promising young people leave. Little has really changed in 20 years, says Gallagher.

Though dissidents are small in number, locals are reluctant, even afraid, to talk about them.

“I’ve my children to think of. All it takes is one of them to do something in the dead of night,” says one.

“Nobody will come out and tell you they support them or don’t support them,” says former SDLP, and now Independent, councillor Patsy Kelly.

“The dissidents are in a minority, but they annoy me because there’s so much good going on in this town.”

Kelly lived in London until the IRA declared a ceasefire in 1994. The news brought him home. “I came back here because I saw things happening, and I saw things were going to change. There was hope because the IRA laid down their arms and they saw there was no way forward with violence.

“You can see that by the elections, you can see the number of people who now vote Sinn Féin because they’ve been in the way of peace these last 20 years.”

Jailed for causing an explosion and IRA membership when he was just 16, McMahon spent seven years in prison.

The ceasefire brought him “sleepless nights”, particularly Sinn Féin’s 2007 decision to support policing. Yet he went on to become the party’s first chairperson of the District Policing Partnership in the town.

“I absolutely appreciate and respect anyone’s right to disagree with any organisation or with Sinn Féin’s position, but my difficulty is that [those people] don’t have the backing of the community they say they represent,” he says.

“If you’re out of step with the community and you don’t grasp that, then what you’re doing is folly.”

1 Parents jailed over female genital mutilation of daughter
2 Gardaí may have to wait days to interview mother of McGinley children
3 Border on Brexit: ‘Europe will look after Northern Ireland’s interests’
4 Election 2020: Party leaders clash on multiple issues in TV debate
5 ‘You’re moving to Ireland? God help you. I hope you never get sick over there.’
Real news has value SUBSCRIBE