ESB Networks says storm has left it in ‘unprecedented territory’ 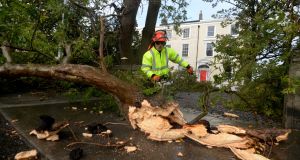 ESB Networks is beginning the massive task of restoring electricity supplies to 450,000 homes and businesses left without power in the wake of Storm Ophelia. The operation is likely to take several days.

The company said no previous storm had done as much damage or left as many customers without power. The closest level of damage was caused by Storm Darwin in 2014 when about 280,000 customers were left without supply and the restoration work took eight days to complete.

Storm Ophelia affected many more customers, with 360,000 without power by Monday afternoon and the number rising by the hour.

“It is our position at the minute we expect approximately 450,000 homes and businesses to be without electricity by darkness this evening,” Derek Hynes of ESB Networks said at an early evening briefing.

“We have currently over 3,300 faults on our network across the country. Pretty much every part of the country has been affected at this point in terms of electricity supplies.

“Those 3,300 faults are affecting just over 360,000 customers. What that really means for us is that we are in unprecedented territory.”

Mr Hynes said the company “will be working, and we are working right now, in terms of prioritising the restoration plans to commence tomorrow.

“Staff have started working on restoration efforts in the southern half of the country. As weather conditions have improved, we will be moving resources into the affected areas, as the position becomes clearer in terms of where and who the customers are that are without supply.

“Currently our prioritisation is looking at restoring the supply to vulnerable and medically-affected customers and we will then move on into restoring supply to state infrastructure, schools, water supplies. communication facilities.”

He said he expected the work would take “a number of days”.

Northern Ireland Electricity said about 20,000 customers were cut off on Monday evening.

The company warned that fallen wires or damaged electricity plant should be avoided as they were live and extremely dangerous.

In southern counties of the Republic, ESB Networks repair crews began an assessment of the damage as the storm abated later on Monday, but they were not due to reconnect many areas before Tuesday morning.

A spokesman said crews would be working until about 11.30pm on Monday and would be out again before first light on Tuesday. Crews had been on standby since Sunday and were ready to reconnect homes “just as soon as it is safe to do so”.

Storm Ophelia hit the south coast of Ireland early on Monday, bringing gusts in excess of 130km/h, with the initial impact causing damage to the electricity network across Kerry, Cork and Waterford. Falling trees on overhead lines were responsible for most of the damage to the network.

Kinsale was an early casualty but as the day progressed the ESB Networks “real time map” became covered with blue crosses, each one indicating a “cluster” of faults in the immediate area. The clusters spread rapidly up the country, affecting all regions.

Although the greater Dublin area was spared the worst of the power failures, some parts were affected in the afternoon.

Shortly after 3pm ESB Networks updated its estimate of the number of customers affected to 360,000 as the storm continued.

Customers without power can check for updates on when their fault is expected to be repaired at www.esbpowercheck.ie or on the PowerCheck App for iPhone and Android devices.

A number of water and waste water treatment plants are operating on emergency generators where they are available. Some areas of Cork, the midlands and Galway were without pumped water.