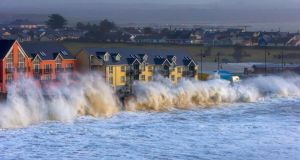 Coastal councils will waste money if their sole focus is on “hard engineering” solutions to recent extreme weather, according to an expert.

At about €1 million per 100 linear metres, hard engineering protection such as revetements, rock armour and groynes are an expensive and often ineffective approach, and one which other countries have moved away from.

Beach nourishment
Research has shown that such heavy protection can be of limited use, merely passing the erosion further along the coastline.

“Beach nourishment”, whereby suitable sand is pumped in from offshore on a periodic basis, was about half the cost and had proven to be very effective in parts of Europe and north America, Mr Murphy said.

Lack of knowledge
The technique has been used in Rosslare, Co Wexford in combination with beach groynes,

but it is not a standard approach here.

“In Ireland, we like the big project, we tend to react rather than prepare, and we don’t study or understand the coastline,” he said. “We also tend to hire in consultants from England and the Netherlands after a crisis, rather than building up our own core expertise.

“Sometimes there is natural coastal regeneration, and that is something we need to know about before we start imposing man-made solutions. Dunes are there to erode when a storm comes, and they have natural cycles.”

Parts of the coast suffer serious erosion even without storms, such as Rossbeigh in Co Kerry which Mr Murphy and his UCC Beaufort Research colleagues have been studying for the past five years.

“In 2008, the dunes at Rossbeigh were breached,” he said. “Since then, an incredible amount of sand, at about five to six million tonnes, has been lost, and the erosion has been continuous.

“Yet that sand may come back in naturally and that is something we need to study in this and other areas in case intervention is not actually required.

“Every section of coastline is different, and reacting in a piecemeal way is also not the answer.”

Coastal cells
“In some areas there are coastal cells, where sediment is fully contained in a unit, whereas on an open coastline sand can move more than 100km.

“The coastline is always changing, and yet there is no funding specifically for coastline research,” he said.

“A storm is a snapshot, whereas we need long-term knowledge – as in databases of waves, currents, seabed levels – to make a proper assessment.”

Marine masters
Beaufort Research, which is part of the Irish Maritime and Energy Resource Cluster at Cork’s Ringaskiddy, has initiated a new applied coastal and marine management masters qualification. The course focuses strongly on reducing the impact from storm events through “proactive management of the marine resource”.