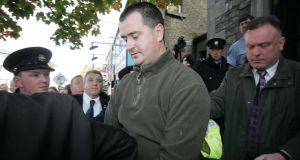 Joe O’Reilly being taken away from Swords District court after being charged with the murder of his wife Rachael O’Reilly in 2006. Photograph: Alan Betson/Irish Times

The State’s application to dismiss wife killer Joe O’Reilly’s murder appeal will be heard next March.

O’Reilly was convicted in July 2007 by a Central Criminal Court jury and sentenced to life for the murder of his wife at their home in Naul, Co Dublin.

Last month was the 10th anniversary of the discovery of Rachel O’Reilly’s badly beaten body. The 30-year-old was found in the bedroom of her home on October 4th 2004.

O’Reilly (41) has lodged an appeal under Section 2 of the Criminal Procedure Act 1993 to have his conviction declared a miscarriage of justice. The State has lodged a motion to strike this out.

It was agreed today between counsel for both parties that the State’s motion to strike out O’Reilly’s appeal will be heard on March 3rd in the Court of Appeal.

The Court of Appeal had heard previously that a number of issues were raised, including circumstances where the book of evidence was left in the jury room at the 2007 trial as well as meetings between various people.

O’Reilly was not in court for today’s hearing. He lost an appeal against conviction in 2009 and in August 2012 he failed in to have his conviction quashed after arguing his detention in Midlands Prison was unlawful.

In November 2012 , O’Reilly was granted legal aid in his bid to have his conviction declared a miscarriage of justice after the State lodged no objection.

Section 2 of the Criminal Procedure Act 1993 states that a person who remains convicted after appeal may apply to the court to have their convictions quashed based on alleged new facts that show there was a miscarriage of justice.