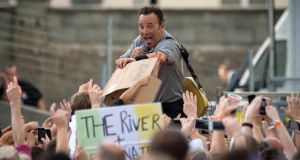 Bruce Springsteen at Nowlan Park, Kilkenny. “We feel like we have been adopted here in Ireland,” the singer said. Photograph: Dylan Vaughan. 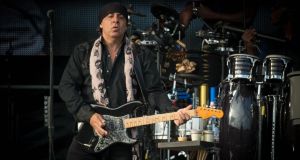 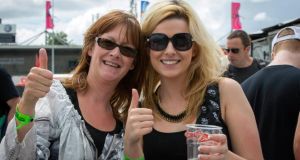 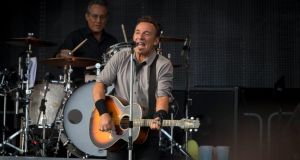 Twenty-eight concerts in 28 years. No major artist has played Ireland so often and to so many people, but for fans of Bruce Springsteen, familiarity has brought a degree of ecstasy not contempt.

There is no fan like a Springsteen fan. They queue overnight for the pit with their handwritten signs detailing the number of concerts they’ve been to and the names of songs they want played.

Concerts number 27 and 28, or the “last big spectaculars” as Springsteen called them, were played out in the grateful city of Kilkenny over the weekend. Some 60,000 fans passed through the gates of Nowlan Park on Saturday and Sunday night, a venue that has known its share of homegrown superstars.

Yet, even the Kilkenny hurling team know their place, requesting that their match yesterday against Cork be the curtain raiser at Semple Stadium so they could get back in time to see Springsteen.

Taking Springsteen out of Dublin has turned his concerts into major events and has given a lift to Limerick, Cork, Belfast and Kilkenny.

Residents around Nowlan Park gathered in their front-facing gardens to listen to Springsteen, some making a dinner party out of it.

The 63-year-old, who looks and performs like a man half his age, recalled the first of his Irish shows at Slane Castle in 1985, by his own admission the first time he realised he had become a global phenomenon.

“There was actually more people at that concert that I thought lived in Ireland,” he joked. “It was a huge day in my memory. Since that time, we feel like we have been adopted here in Ireland.”

The feeling is mutual as Springsteen clocked in another set of three-hour plus shows with his 18-piece band, which included the whole of the Born in the USA album.

The crowd was only melting away when Springsteen and his band were driven off in a convoy of blacked-out vehicles at breakneck speed reportedly to nearby Mount Juliet.

The chronicler of middle America is also the darling of middle Ireland. His set went down a storm with the wide age-range present, from kids to grandparents along with the main demographic, the ones with the babysitter on speed-dial.

He enjoyed a night of bowling and fun in the booked-out K-Bowl at MacDonagh Junction in Kilkenny on Thursday, signing autographs and posing for photographs outside afterwards after word spread. He then headed for Dublin on Friday and an evening out and about, before returning to Kilkenny to earn his keep.

It is no surprise Kilkenny’s 3,000 hotel and B&B beds were snapped up, with many locals offering up their private quarters to the weary and, in some cases, ageing rock fans.

Glory days indeed, and unlikely to ever be repeated in the area. As the mayor, Martin Brett, put it: “It doesn’t get bigger than this.