Tube worm which can build natural coastal defences among those identified 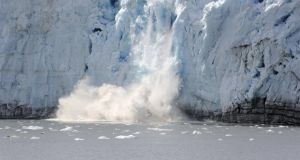 Marine temperature records continue to show an overall upward trend, with Arctic sea-ice retreating and becoming thinner between 2007 and 2013.

European and Asian shipping may be using ice-free northern polar routes by the 2030s due to climate change, while anchovies, Chilean oysters, little egrets and striped dolphins are moving north, according to a new scientific study.

A warm-water loving honeycomb worm which forms reefs that can provide “natural” coastal defences may also be multiplying in these waters, according to the Marine Climate Change Impacts Partnership (MCCIP), a group of 150 British and Irish scientists.

The latest MCCIP “report card” notes that the coastal sea surface temperature in the region was lower between 2008 and 2012 than between 2003 and 2007, but attributes this to “short-term variability”.

It says marine temperature records continue to show an overall upward trend, with Arctic sea-ice retreating and becoming thinner between 2007 and 2013.

NUI Galway Ryan Institute university fellow Louise Firth, one of the Irish contributors, notes that the honeycomb worm Sabellaria alveolata is increasing in intertidal areas- possibly due to climate change.

The tiny worm can build very large reefs, due to its ability to construct tubes from suspended sediment and shell fragments. These structures range from hummocks of over a metre to reefs spanning many hectares, she says.

The report card says most models project that the Arctic Ocean will be almost “ice free” in late summer from the 2030s.