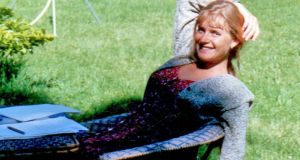 Sophie Toscan du Plantier: “Love of the Land” is a dark, brooding essay she wrote about her visits to Ireland. Photograph: Patrick Zimmermann/AFP

Before she was murdered, Sophie Toscan du Plantier wrote an essay titled “Love of the Land” about her visits to Ireland. She signed it with her maiden name, Sophie Bouniol.

I found “Love of the Land” and other documents given to me by her mother, Marguerite Bouniol, 20 years ago, sleeping in an old filing cabinet.

“All these conversations took place with the sheep and cattle of west Dunmanus, near Mizen Head,” Toscan du Plantier’s west Cork diary begins. The text is playful and literary, a paean to the sea, sky, wind, rocks, colours and light of west Cork, marked by repeated allusions to death.

The image of a fox stalking sheep is woven through the 19-page essay. It is hard not to see it as a premonition of the author’s murder.

“The other day, as night fell, a big fox came to smell the flock,” she wrote. “He approached slowly, against the wind . . . He came to look for the weakest lambs.”

The fox stayed in the field for a long time, Toscan du Plantier recounts. “He studied the animals, sniffing, evaluating their strength, deciding which ones to attack. No one flinched, not even me . . . How did the sheep, who are usually so difficult to approach, not see him, not smell him?”

Toscan du Plantier says her senses have been dulled by living in the city. She undergoes a sort of rebirth and communion with nature.

The eldest in a skulk of foxes “pulls me unwittingly into his clandestinity, forcing me (but also you) to remain silent, to become his companion in hunting”, she writes.

The fox approaches the lambs “who see nothing, smell nothing and suspect nothing. The moon is almost full and the animals can be seen in the darkness.”

Toscan du Plantier was murdered on the night of a full moon.

One morning, fog hides the flock from her. “Everything stopped, even noises and birdsong. You would have thought the air was solid . . . A little fog and you feel you are in the clouds and closer to the sky . . . in the sky. With all this water which one is breathing in suspension.”

Everything stopped, even noises and birdsong. You would have thought the air was solid

When she was house-hunting in 1993, Toscan du Plantier had hesitated between two homes, “one in a gentler climate and landscape, and another, less beautiful, more isolated, on the cliffs and rocks, a strong, windy landscape”, she wrote. “Which is my preference? Difficult to chose between gentleness and violence.”

Though she fretted that “perhaps my house should not be too isolated”, Toscan du Plantier chose the wilder, more violent landscape.

Toscan du Plantier often walked at Three Castle Head. She wrote of the 100m cliffs over the Atlantic “facing America through the fog, storms and fury of the ocean”. Mizen Head, and indeed, all of Ireland, turned blindly towards the US, she wrote.

I found a second, much longer text, by Marguerite Bouniol, in the same filing cabinet. It was, she wrote on page 95, “my cry of pain”, begun in Cork on Christmas Eve, 1996, as she waited to identify her daughter’s body.

Bouniol described Sophie arriving “pale, out of breath, panting”, at the home of friends on the last afternoon of her life. She had been walking at Three Castle Head when she was “seized by an incomprehensible anguish”, her mother wrote.

In “Love of the Land”, Toscan du Plantier alludes to “this house which I wanted without really knowing . . .” Twice in her essay, the French woman pulls tufts of lambs’ wool from a fence.

The charge sheet details how gardaí found tufts of Toscan du Plantier’s hair caught in her fingers on the morning of December 23rd, 1996.

Toscan du Plantier describes “seemingly wild fields, without trees, extending .. . until they fall into the sea”. Boundaries and paths are marked with stones. “Everything is known, classified, catalogued, in an ancestral and collective memory,” she writes.

She sees the carcasses of two cows, stranded at the bottom of the cliffs, “slowly taken apart by the waves . . . The sea is frightening. No one bathes there except tourists in summer. One watches the sea from afar . . . This is a country that distrusts the sea. Few have the vocation to be sailors, doubtless because of childhoods marked by stories of shipwrecks and countless lost bodies.”

Apparently an animal which cannot get up is in danger of dying in just a few hours. Life ebbs away quickly when the body is knocked over

Toscan du Plantier watches a ewe trying to revive a dying lamb. “Apparently an animal which cannot get up is in danger of dying in just a few hours,” she writes. “Life ebbs away quickly when the body is knocked over, loses balance and cannot get up.”

The lambs are capable of “spectacular acrobatics” atop boulders, she continues. “Then all of a sudden, the entire flock commits suicide, from the top of a cliff because of this terror which pushes [the sheep] to run straight ahead.”

Toscan du Plantier comes across a sheep’s body. “A devoured cadaver with his skeleton and skin spread out a little further away. Raw wool, white and animal, dirty and smelling; in fact the whole scalp of a body . . . an empty envelope mixed with dirt and blood. What remains of the jawbone is still flexed, almost open. You die in the wind, in the sea, on the land here; the rottenness is spread out in daylight, perfectly naturally.”

On Monday evening, the assize court in Paris was shown grisly photographs of Toscan du Plantier’s body, not unlike the dead woman’s description of the savaged sheep. Judge Frédérique Aline warned her family, who left the room beforehand.

Marguerite Bouniol used a quote from her daughter’s Irish diaries, dated January 1996, as a prologue to her own book. “Death finalises very old ties and brings the deceased into a wider human community; those who we remember, and who never leave us,” Toscan du Plantier wrote.