‘So enthusiastic, so gifted. . . hurling was his life’ 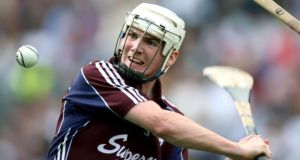 Kilbeacanty and neighbouring Ballyturin, home to the Donohue family, quiet rural communities east of Gort were in shock yesterday after news of the sudden death of skilled Galway county hurler Niall Donohue on the eve of his 23rd birthday today.

“Niall was so involved, so enthusiastic, so gifted, the whole community was so proud of him . . . and hurling was his life,” said retired south Galway school principal Philomena Glynn yesterday, as she expressed her heartbreak.

It’s an area that is rarely in the news, apart from the landslide in nearby Derrybrien in 2003, the return of Fr Eamon Casey to the parish of Shanaglish in 2006, and flooding in the area in 2009.

However, Niall Donohue had put Kilbeacanty on the map for all the right reasons, when he won an All-Ireland under-21 title with Galway in 2011 and made it with his county team to last year’s All-Ireland senior championship final, before losing to Kilkenny in the replay.

“He was a quiet, pleasant, happy little child who was very easy and never caused any bother,” Mrs Glynn recalls.

She was particularly close to the family, as she was Niall’s junior infants teacher in Ballyturin National School when his mother Mary died of cancer at a very young age.


Gifted
“His brother Shane was just two years older, his sister Orla was very small, at the time, and it was very hard. But their dad Francis was so very good with the children, “she says.

“Niall was very sporting, right from the start – athletic and gifted when it came to hurling, which took up at the age of five or six. So it’s all very raw really to hear this.”

“Niall was one of our leading lights in the club,” Galway hurling board secretary Pat Kearney said, as flags flew at half mast on the Kilbeacanty GAA club grounds yesterday and many tributes were paid to the player on social media.

“But young men are struggling . . . they are finding it difficult out there, and there’s a lot of pressure on them,”Mr Kearney said.

“And we’ve many who’ve left for Australia and England, and who are travelling home for the funeral now, having heard about what occurred.”

Fr Paddy Callanan, parish priest of Kilbeacanty and Peterswell, said he had been called to the Donohue family home shortly after 7pm on Wednesday. Niall’s father, who has a plumbing business, had returned from work to find his middle son had died.

“It was pretty much out of the blue . . . you never know with these things,”Fr Callanan said, recalling that Niall’s grandmother, with whom he had shared a particularly close relationship after the loss of his mother, had passed away a few months ago.

After attending Gort Community School, he had spent a brief period in Australia, where his brother Shane has been based, along with a number of friends from the community.

“He had a natural talent as a hurler,” former Fianna Fáíl minister and Kilbeacanty native Frank Fahey said. “ I saw him play a championship game with Kilbeacanty a few weeks ago and he absolutely dominated the game.”

“He had skill, speed, strength, and he will be a big loss,” Mr Fahey said, expressing his sympathies to the family.