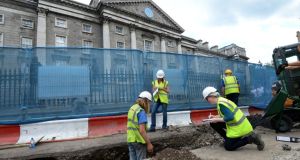 Human skeletal remains have been found during digging works outside the front gates of Trinity College Dublin today.

Two gardaí and a number of workers were standing around the deep hole as diggers and trucks stopped work on the site on College Street, at top of College Green.

Gráinne Mackin, director of communications for the Luas cross-city project, said the remains were found about 1.5 metres down a trench at about noon today.

“Just by appearance the remains look to be historic - we could be talking medieval times,” she said, adding work had stopped in the area in front of Trinity to allow for archeological experts to finish unearthing them.

“It could take a number of days. The work has to be done carefully and sensitively,” she said.

Restrictions in College Green have been in place to facilitate the diversion of underground pipes ahead of the laying of tracks for the Luas cross-city works.

The tracks will link the existing Red and Green Luas lines through Dublin city centre.