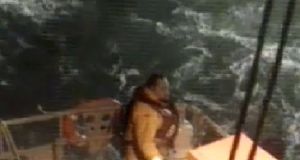 A still from a video of the rescue of six fishermen off Dublin. Photograph: RNLI

Six fishermen were rescued by the Dún Laoghaire lifeboat in difficult weather conditions off Dublin Bay early on Wednesday morning after a rope snagged in their vessel’s propellor.

The 25-metre beam trawler Argonaut IV was working east of the Kish Bank when it sought assistance from the Irish Coastguard shortly before 2.50am.

Winds were gusting up to 90km/h in a force nine gale, with three to four metre waves. The lifeboat arrived shortly before 4am. Having established that the fishermen were safe, the lifeboat began working with the vessel to set up a tow.

It took several attempts to secure a tow in the highly challenging sea conditions, with poor visibility.

The towline parted on three occasions during the long slow passage at two to three knots into Howth harbour.

Howth lifeboat crew launched at 9.40am to provide assistance for the last leg, and the trawler and crew berthed in Howth at 10.40am.

“The high winds and rough seas made this call out particularly challenging,especially when establishing and keeping a tow, but we persevered and thankfully were able to return the fishermen and their vessel safely to shore,”he said.