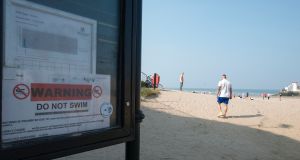 A ban on swimming at Velvet Strand in Portmarnock, Co Dublin, which was imposed by Fingal County Council on Thursday, is to remain in place until at least Monday next.

However, swimming restrictions at six other beaches in north county Dublin have been lifted, after tests showed the water quality at each location was satisfactory.

A prohibition on swimming had been imposed at Loughshinny, Rush north beach, Skerries south beach and Balbriggan front strand last weekend and on Tuesday, while advisory notices were also put in place at Velvet Strand, Claremont and Sutton/Burrow during the week.

Advisory notices do not prohibit swimming, but warn swimmers of the need to avoid swallowing water and to wash after they leave the sea.

They also advise specific categories of people, including those with weakened immune systems, those who are pregnant or those with cuts, not to swim.

The prohibition notice is a more serious category and indicates a suspicion that the water has been seriously contaminated.

The prohibition notice issued for Velvet Strand will remain in place until at least Monday, when the results of tests on water samples taken on Thursday will be available to Fingal County Council.

Members of the public intending to enter the water at any beach in the Republic are advised to check the water quality in advance by accessing the EPA website or by checking the noticeboard at the entrance to each beach.