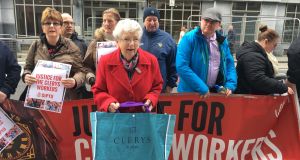 A settlement for the former Clerys workers who lost their jobs when the Dublin department store closed almost two years ago will be announced on Tuesday morning.

Siptu on Monday withdrew its appeal against plans for the €150 million redevelopment of Clerys after terms of a deal were reached with the building’s owner Natrium/OCS.

The union had been the only appellant to An Bord Pleanála against Dublin City Council’s decision last December to grant permission to OCS Properties, to redevelop the department store as a hotel, offices, shops and restaurants.

Clerys closed in June 2015 with the loss of more than 460 jobs, when Natrium, backed by FAM Assets and UK-based Cheyne Capital, bought OCS Properties, which owned the building and OCS Operations, which ran the department store, for €29 million.

It sold the operating company to an insolvency specialist which successfully petitioned the High Court to have it liquidated. As a result, 130 Clerys employees and about 330 people working for concession holders, lost their jobs. OCS said at the time that a number of concession staff were redeployed.

Press conference tomorrow at 10 am at the Mansion House. pic.twitter.com/NyHhnWm60F

Following a half-day of hearings at An Board Pleanála’s head offices on Marlborough Street in Dublin on Monday, the union asked for short adjournment of the hearing. It returned in the afternoon and said it was withdrawing its appeal.

Shortly before the hearing was halted, Lord Mayor of Dublin Brendan Carr issued a statement to say he would be making “a major announcement in relation to the Clerys development on O’Connell Street” on Tuesday.

Speaking outside the hearing, Ms Buckley said an intervention by Mr Carr had “succeeded in establishing a process which the campaign is confident will adequately deal with our concerns in relation to the Clerys development”.

It is understood the package of measures will include a financial settlement for the former workers. Following the liquidation of the company, the State had to pay the €2 million in statutory redundancy due to the 130 Clerys staff.

Independent city councillor Nial Ring, who had been due to speak at the planning hearing on behalf of Siptu, welcomed the deal.

“This is great news, especially for the former Clerys workers who were treated so badly when the new owners took over nearly two years ago, when long-serving and loyal employees of Clerys were unceremoniously shown the door and ignored thereafter,” he said. “The fact that Deirdre Foley of Natrium and Siptu have sat down and negotiated a settlement which will hopefully look after the former workers as well as spell out the future employment prospects in the new development can only be welcomed” he said.

Labour Party representative and former senator Joe Costello said the agreement was a victory for the Clerys workers and he expected the deal would address the major issues of concern with the planning application.