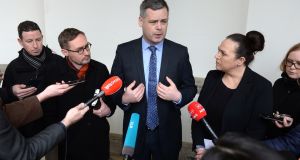 A series of rallies being held around Ireland by Sinn Féin are an attempt by the party to report progress on its efforts to form a government, Donegal TD Pearse Doherty has said.

He described criticism of the events - the first of which takes place in Cork on Monday night - from Fine Gael and Fianna Fáil as “hysterics”.

Taoiseach and Fine Gael leader Leo Varadkar said the rallies are the “next stage of Sinn Féin’s campaign of intimidation and bullying” while Fianna Fáil TD Darragh O’Brien said they are “right out of the Trump playbook”.

Speaking ahead of Sinn Féin meeting the the Green Party for talks on government formation on Monday, Mr Doherty said he had heard Mr Varadkar’s comments about intimidation and bullying.

“These are public meetings. This is elected representatives going out to meet people who voted for us and indeed people who didn’t vote for us, opening us up to questions and letting people know exactly what happens,” he said.

“And that is the difference between ourselves and other political parties. When the election is over, we just don’t close the doors of Government Buildings.

Mr Varadkar also claimed there had been “bullying and intimidation” by Sinn Féin online, but Mr Doherty, his party’s lead negotiator, rejected the suggestion that there are orchestrated internet campaigns by the party.

“If there is any type of activity of that nature that is untoward then obviously if that is brought to our attention we will deal with that,” he said.

“The only threats that are happening at this point in time are to (Sinn Féin) vice president Michelle O’Neill , to one of our ministers in the North.

“Maybe I am mistaken but I haven’t heard Leo Varadkar come out and condemn the fact that the PSNI told our party that they had intelligence that there was an attack going to be carried out on their lives.”

On the public meetings, Mr Doherty said: “In any other democracy, this would be applauded and welcomed. For Leo and Micheál Martin, they fear they type of change that people want.”

He said the Sinn Féin leadership will report on talks progress at the events and he ruled out any street protests being organised.

“We did get the largest mandate and we thank every single one of them who have come out and voted for change but other parties also a got a vote for change and that is why we’ve been discussing in detail with them over the last two weeks and now going into intense discussions in relation to the key policy issues,” Mr Doherty said.

“We will be opening up ourselves to questions from the public to let people know what we have been doing over the past two weeks, where we want to go and also hearing from ordinary people in relation to their desire for change and what they believe needs to be the centre stone to a programme for government.”