Canada trip is first out of Ireland for director, who has Motor Neuron Disease, since 2008

The film-maker Simon Fitzmaurice has motor neuron disease. Now able to move only his eyes, he has written a powerful memoir for his five children using an eye-gaze computer. Video: Daniel O' Connor 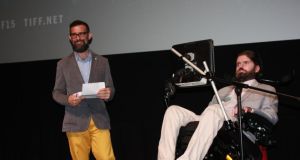 Wicklow film maker Simon Fitzmaurice at the international festival premiere of his first feature film My Name is Emily at the Toronto Film Festival.

Wicklow film maker Simon Fitzmaurice has attended the international festival premiere of his first feature film My Name is Emily at the Toronto Film Festival.

It is his first appearance outside of Ireland since his diagnosis with motor neuron disease in 2008. The festival included his film as one of 30 features by first and second-time directors from around the world who are deemed ones to watch for the future.

Transportation is an expensive matter Mr Fitzmaurice as he requires special seating in planes and cars as well as extra care staff. His trip to Canada has been sponsored by Culture Ireland.

“Getting to Toronto is the result of a lot of people’s work and support, including Culture Ireland, and I’m so grateful to everyone involved,” he added.

Minister of State Minister of State with responsibility for New Communities, Culture and Equality Aodhán Ó Ríordáin TD said he was delighted “that Culture Ireland is supporting [Fitzmaurice's] presence at Toronto International Film Festival to attract the attention both he and his film deserve worldwide.”

My Name Is Emily is a road movie with Harry Potter actress Evanna Lynch in the title role. It was partially funded by the Irish Film Board and €120,000 of it was crowdfunded with endorsments from Colin Farrell, Alan Rickman, Sam Neill, Jedward and Lenny Abrahamson.

The film is a love story about a 16-year-old girl who goes on a road trip across Ireland with a boy from her school to free her father from a psychiatric institution. Fitzmaurice says it’s about “madness, sadness and love”.

He described his reasons for making My Name is Emily as a “passion for the work, a creative drive that’s been with me since I was a teenager.

“To manage to do this with MND, to overcome all that that puts in my way, shows me how much it means to me,” he said.

“Making a feature film is like a writer moving from short stories to their first novel. To spend this precious time I have doing something that fulfils me at the deepest level, that echoes in my soul.”

Fitzmaurice is currently working on a new script.