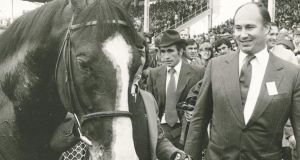 File photograph of the Aga Khan with Shergar.

Secret embassy files about the stolen racehorse Shergar, information about US military aircraft landing at Irish airports and files about telephone tapping were among historic records the Government refused to release for public inspection.

A long list of files relating to the years 1981-1984, a period of turmoil in politics and in Anglo-Irish relations, remain under wraps, including files from Irish embassies in Brussels, Chicago, Madrid, New York, Vienna and London.

A file from the London embassy relating to Shergar, the Aga Khan-bred stallion believed stolen and killed by the IRA in 1983, were held back when the Department of Foreign Affairs released its files last December.

The reason given was that the information might cause distress or danger to living individuals or that it might lead to a defamation action.

For a similar reason, a file relating to Border security incidents involving incursions by “British or Northern Forces” was also held back.

A file for the period 1982-1984 held back by the Attorney General’s office is labelled “Interception of Telephone calls – Postal and Telecommunications Services Act 1983”.

It is unclear whether the file refers to the episode in which the phones of two journalists were tapped with the authorisation of the short-lived Fianna Fáil government of 1982.

In what was one of the biggest political scandals in the history of the State, then minister for justice Michael Noonan revealed in the Dáil in 1983 that the telephones of Geraldine Kennedy and Bruce Arnold had been intercepted.

Ms Kennedy had been writing about challenges to then taoiseach Charles Haughey’s leadership, and then minister for justice Sean Doherty authorised official surveillance.

Other files from 1983-1984 held back relate to “Postal & Telecommunications Services Act 1983 – Continuance of Legal Proceedings”.

Two files relating to legal proceedings against the State and the Attorney General, and in one case also the minister for posts and telegraphs, are also withheld.

Kennedy and Arnold took successful legal action against the State and each was awarded £20,000 in damages in 1987.

When records were released to the National Archives in 2013, Ms Kennedy wrote in The Irish Times there was “nothing really new” in relation to the phone tapping.

She said the State papers were “interesting, if disappointing, in many different ways”.

By law, Government department files more than 30 years old must be transferred to the National Archives, unless they are deemed to be so sensitive they should not be released.