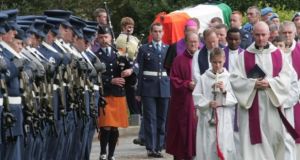 Minister for Defence Alan Shatter has said that no further investigation is warranted into the Air Corps training crash on the Galway-Mayo border in 2009 which claimed the lives of an instructor and trainee.

All three reports into the crash in which Capt Derek Furniss (23) and Cadet David Jevens (22) died agree that Cadet Jevens “bore no responsibility of any kind for the accident”, Mr Shatter has said.

Mr Shatter had been due to meet Donal and Liz Jevens, parents of the late Cadet Jevens, yesterday (WED), but was represented instead by the Department of Defence secretary-general Maurice Quinn and the defence force’s chief of staff, Lieut Gen Conor O’Boyle.

Mr and Mrs Jevens are not pushing for a new investigation, but are seeking removal of what they state to be “false evidence” in the Defence Forces military court of inquiry report into the crash which, they say, is “damaging to their son’s military character”.

They say that the military court’s report contains “serious inconsistencies”, and have questioned why the “most important post holders” in the Air Corps at the time were never interviewed ,questioned or identified for their part in what they term “ failures of command and supervision”.

They also want the full transcript of the two-day inquest into the crash to be incorporated into the military court report, rather than just the inquest verdicts.

They have said that if Mr Shatter and his department refuse to engage with them on this issue, they will have no option but to bring certain matters “into the public domain”.

In a parliamentary reply to Sinn Féin TD Pádraig MacLochlainn, Mr Shatter said that he understood that the family felt that the military court report “introduces issues and opinions which, in their view raises questions concerning their son’s role in this tragic event”.

“For the record, I would again like to reassure them that this line of argument is not supported in any report and has never been given any official credence,”Mr Shatter said.

Extending his sympathies to the families of the two airmen, Mr Shatter said that he had sought the Attorney-General’s advice, following receipt of correspondence from the Jevens family.

“ I have fully considered the matter in the context of this legal advice and I am satisfied that a further investigation is not warranted into any issues relating to this tragic accident,”he said and he had conveyed this to the Jevens family earlier this year.

Mr Shatter noted that the Air Accident Investigation Unit report of January 24th, 2012, found that t the probable cause of the accident was the spatial disorientation of the instructor/pilot in conditions of poor visibility resulting in controlled flight into terrain.

The subsequent coroner’s inquest in May 2012 recorded an open verdict in relation to the instructor pilot, Capt Furniss, and a verdict of accidental death in relation to Cadet Jevens.

The third investigation, the mititary court of inquiry convened on July 26th, 2012 and published on January 17th, 2013, was “consistent with the earlier investigations, namely that the probable cause of the accident was the spatial disorientation of the instructor who was piloting the aircraft in conditions of poor visibility at the time”, Mr Shatter said.

At Galway Circuit Court last month, counsel for Mr Shatter John Kiely expressed the minister’s “sincere regret” when the State accepted liability for the crash, and the maximum amount of €25,395 was awarded to the Jevens family for their son’s death.

Mr Shatter said this week that there were “two further cases in respect of this accident which relate to alleged negligence and personal injuries which have not yet been dealt with”.

“As these matters are sub judice, it is not appropriate to make any comment at this time,”he said.