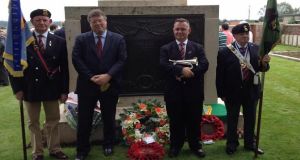 Irish ambassador to France Rory Montgomery today paid tribute to the Irish-born soldiers who died fighting for the Munsters.

Commemorations have taken place in the French village of Etreux to mark 100 years to the day since the Royal Munster Fusiliers made a rearguard stand against the German army.

The 2nd battalion of the Munsters was almost completely destroyed having faced six battalions of German infantry.

Among the dead were 18 soldiers from Cork, 13 each from Limerick and Kerry and four from Clare. Some 95 of those who were killed were buried in a mass grave in an orchard where the battalion finally surrendered.

A service of remembrance took place in the Etreux Commonwealth War Graves Commission (CWGC) cemetery on the spot where the orchard was located.

The outgoing Irish ambassador to France, Rory Montgomery, paid tribute to the Irish-born soldiers who died fighting for the Munsters.

He said that the time for “contestation about the rights and wrongs in Ireland was past and the time for querying people’s motives is also I hope passed. We should focus on the human losses involved and the effects this would have had on the families.

“I’m very glad that the State has become so much more open to recognising this strand of our history.”

He said President Michael D Higgins’s presence at the unveiling of the Cross of Sacrifice at Glasnevin at the end of July was indicative of the Irish Government’s determination to ensure that the Irish involved in the war were properly remembered.

The 2nd Munsters were tasked with fighting a rearguard action against the 2nd German Army.

The Munsters were regular soldiers who were part of the 1st Division of the British Expeditionary Force. Their division was trying to squeeze through the narrow streets of the town of Guise and the Munsters were to hold the Germans up just long enough to allow the division to makes its escape.

The Munsters had artillery and cavalry support, but they left when the order to retreat came. The order never got through to the Munsters who were left facing the advance battalions of an entire army on their own.

The Munsters suffered terrible losses, but did their job sufficiently well to allow their division to escape.

According to the citation on a Celtic Cross erected after the war, the Germans “warmly congratulated” the Munsters on their fight and allowed them to bury their dead.

Some 60 members of the Royal Munster Fusiliers Association (RMFA) attended the wreathlaying service in Etreux. A wreath was laid by the president of the association Liam Nolan. The mayor of Etreux Joël Noisette also laid a wreath.