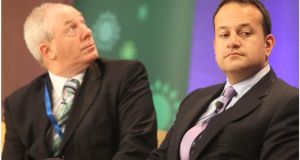 Minister of State for Tourism, Michael Ring with Minister for Tourism Leo Varadkar at the launch of The Gathering 2013. Two thirds of respondents to Fáilte Ireland’s Tourism Barometer reported an increase in visitor volumes so far in 2013.

BUSINESS sentiment in the tourism sector is at its highest level since the start of the financial crisis with two thirds of accommodation providers citing increased visitor volumes in the year to date.

The Fáilte Ireland Tourism Barometer surveyed 784 tourism businesses about tourism performance for 2013 and about their prospects for the remainder of the year and into 2014.

Hotels fared the best with 68 per cent of respondents in the sector saying visitor volumes had increased this year.

However, 67 per cent of caravan and campsites operators also reported increased visitor levels with all respondents citing the fine weather experienced in 2013 as a driving factor.

Restaurants and guesthouses were also busier with 58 per cent of respondents in both citing that the year to date has been busier than 2012 while 53 per cent of hostels and 52 per cent of self catering providers also reported higher visitor volumes.

B&Bs reported slower growth, however 46 per cent still said this year was better than last while 28 per cent said visitor volumes had remained the same. However just over a quarter of B&B owners said business had worsened when compared to last year and 41 per cent of respondents reported that their profitability was down compared to 2012.

Almost two thirds of operators reported an increased in overseas visitors with 73 per cent citing an increase in visitors, especially from North America.

Overall, one in three respondents said they experienced increased business as a result of the Government’s tourism initiative, The Gathering, which encouraged people to visit Ireland in 2013.

When asked about their prospects for the year ahead 61 per cent of businesses said they expected business to increase in that period, compared with just 14 per cent of correspondents who were asked the same question in 2008.

Welcoming the report’s findings Minister of State for Tourism Michael Ring said he was delighted to see that sentiment in the industry is so high.

“The recent Budget maintains the VAT rate (for the tourism industry) at 9 per cent and also reduced the air travel tax to €0...We have seen very significant growth in jobs, revenue and visitor numbers over the last couple of years, and the Budget measures will build on that momentum and help the industry to remain competitive and provide good value.”