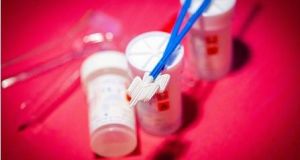 One of the memos given to PAC members said there was a risk that releasing audit findings to doctors could result in a patient contacting the media if they believed that “screening did not diagnose my cancer”. File photograph: Getty Images

Senior health service personnel who received briefings from the CervicalCheck screening programme were told women would receive information from their GPs about audit findings, the HSE has said.

In a letter sent to the secretary general of the Department of Health Jim Breslin last Friday, new interim HSE director general John Connaghan said the senior officials had been assured by CervicalCheck that its audit process had found “no systematic quality problem of concern”.

Mr Connaghan said a dispute between CervicalCheck and doctors over who should tell patients about their audit findings had not been escalated up the line to more senior health service mangement.

“While CervicalCheck and the National Screening Service (NSS) were dealing with these issues as they arose, the problems were not reported through the NSS governance line, to the HSE’s national director for health and wellbeing,” he wrote.

“Consequently, neither the former director general nor the Department of Health were briefed by the national director health and wellbeing on these issues. Management updates from the NSS indicated that the audit process was continuing as planned and that the audit findings were making improvements to the programme.”

Mr Connaghan said he had received a number of clarifications in relation to controversial memos on the cervical screening issue which were given to members of the Dáil Public Accounts Committee (PAC) last week.

He said the briefings given in March 2016 to the HSE’s national director for health and wellbeing, the former HSE director general, the Department of Health’s acute hospitals division and the office of the Chief Medical Officer were to raise awareness of the process that Cervical Check had been engage in.

“The intent of the CervicalCheck programme was that all treating clinicians would be given individual audit findings for their patients so that these could be communicated to the women concerned, in line with guidelines at that time,” he said.

Mr Connaghan described as “appropriate and necessary” steps envisaged in one of the memos for CervicalCheck to prepare for dealing with negative media coverage arising from the audit findings.

One of the memos given to PAC members said there was a risk that releasing audit findings to doctors could result in a patient contacting the media if they believed that “screening did not diagnose my cancer”.

Mr Connaghan said: “The expectation of the programme was that women would be taking legal advice and there existed the potential that the details of these legal cases would be in the media.

“The briefing in March 2016 makes clear that CervicalCheck was preparing for this media coverage - in advance of this media - and the potential for negative publicity that could have led to the undermining of a population screening programme whose primary purpose is saving lives (within the limits of the science available). Such steps are both appropriate and necessary.”

Health staff will not be offered choice of Covid-19 vaccine – HSE 13:43
Nphet says normal life ‘some way off’ and vaccination unlikely to fully halt Covid-19 13:45
Covid-19: Catholic bishops call on all to support vaccination programme 13:14
Family of woman who died from cervical cancer settles case 12:52
Covid-19 Vaccine Tracker: What's available in the Republic of Ireland and what else is coming? 11:57