People need to know how to ‘stay safe’, help themselves and aid others if incident occurs 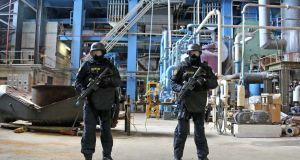 The Government has been urged to be more open with the public about what could happen in the event of a major terrorist attack in Ireland.

Security consultant Sadhbh McCarthy said people needed to know how to “stay safe, how to help themselves and help others” should such an event occur.

Speaking to The Irish Times after the recent terrorist atrocity in Paris, in which 130 people were killed in incidents for which Islamic State has claimed responsibility, Ms McCarthy said during such an attack “you want people to react in ways that maximise safety and minimise risk and any negative effect on what the police and army are doing”.

“We should be telling people what the realistic situation is,” she said. “We’re being told nothing. We haven’t been told here’s why [everything] is fine.”

The fact that Ireland could be a target of Islamic State, also known as Isis, or a like-minded group or individuals, was emphasised last week by the publication of a video by the group’s propaganda arm. In it, Ireland was identified as one of 60 countries, described as the “global coalition against the Islamic State”.

As Ireland seeks to prepare itself for a potential attack, suggestions are emerging in security and Government circles that the Office of Emergency Planning, which oversees co-operation and planning by State agencies during times of emergency, should have a role in ensuring an appropriate level of readiness exists.

The office involves a taskforce chaired by Minister for Defence Simon Coveney and includes other Ministers and senior officials of relevant government departments, plus senior officers of the Defence Forces, An Garda Síochána and officials of other public authorities, including local councils and service providers.

To date, the office has mostly concerned itself with ensuring timely and effective responses to natural disasters such as flooding, but also the sort of inter-agency reactions required in the event of a major transport disaster involving an air, rail or road incident.

Security sources suggest that in light of what happened in Paris, when terrorists armed with assault rifles launched multiple attacks, inter-agency co-operation and joint training in Ireland must be ratcheted up.

Ms McCarthy said Irish agencies were better prepared to meet a terrorist attack than they were being given credit for. She said the Garda and Army have substantial experience in dealing with terrorism from the Troubles era and now from an ongoing dissident threat.

“I don’t subscribe to the notion that we’re the least prepared country in the world. We actually have a standing force used to dealing with threat and responding,” she said.

“It’s not the agencies that are weak, or their operational capacity, it’s the Government. The State doesn’t trust us to give us the best information available, to educate us. Where’s the trust in us?”

How to respond effectively to both so-called lone wolf and multiple personnel terrorist attacks, perhaps involving several simultaneous targets as happened in Paris, was a talking point last week during a week-long training course in the Curragh. It was run by the Army Ordnance School and funded by Nato. It was planned before the Paris atrocity.

A disused petrol station inside Curragh Camp was the setting for a mock terrorist attack that was quelled by members of the ERU, with assistance from the Air Corps.

As members of the public were filling up their tanks, a terrorist gang drove up and started shooting them. The first gardaí to respond were unarmed and forced to retreat but called for ERU support. The first ERU team arrived by car and used handguns to kill one of the terrorists.

However, it was the second ERU team, airlifted in by Air Corps Agusta helicopters and armed with submachine guns, that was needed to fully overcome the attackers.

The exercise took months of planning and did not involve the Army’s ranger wing, the Defence Forces’ elite unit, seen recently on the roof of the Dundrum Shopping Centre in Dublin as part of a sniper training course.

That unit would almost certainly be deployed if anything on the scale of Paris unfolded in Ireland.

Security sources say that joint exercises between the ERU and the rangers are essential, together with involvement by civilian first responders, mirroring the type and scale of the Paris attacks are essential.

In Northern Ireland last week, emergency services there jointly displayed and compared their equipment to assess their preparedness for a major emergency, in light of the Paris attacks.

Ireland’s appearance as a would-be “devil” among the coalition members cited by Isis last week, is due to the State’s presence on a list published on the US state department’s website, headlined “the global coalition to counter Isil”.

Ireland is on the list, along with 63 other countries and the European Union.

The list dates from September last year when US president Barack Obama announced he was seeking international support to “degrade, and ultimately destroy Isil through a comprehensive and sustained counterterrorism strategy”.

Responding to questions from The Irish Times, the Department of Foreign Affairs said that the list was of countries “that have participated in discussions with them on international co-operation to address the Isil terrorist threat”.

“Ireland along with other EU member states, and the EU itself, participate in those discussions,” the statement said.

“There are no obligations arising from our participation in the global coalition, which involves sharing of information and views . . .The contribution of different countries varies according to their circumstances and policies. Ireland’s primary focus is on the political and humanitarian spheres.”