Section of new Waterford greenway to open next week 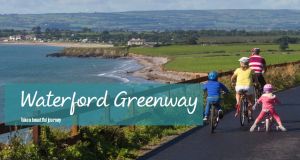 An image from the visitwaterfordgreenway website. The first section of the Waterford Greenway will open next week.

The first section of a multi-million euro greenway in Co Waterford will open next week.

A 23 kilometres section linking Kilmacthomas to Dungarvan will open from Friday. The remaining section, from Kilmacthomas into Waterford city will complete the 46km route and will open early next year.

Director of services at Waterford City & County Council Lar Power said he was pleased the Kilmacthomas to Dungarvan section, which runs along an old rail line, would open shortly.

He said the full walking and cycling route would be open next Spring and in time for the start of the tourism season.

“The route is safe and fully accessible for everyone, including cyclists, walkers, families with children, and both young and old.

“The greenway is a terrific facility, not just for the people of Waterford, but for the whole country and for international visitors,” said Mr Power.

Mr Power said there were several access points along the route, with car parking facilities at Kilmacthomas, at both the Workhouse and the Mill and at McGrath’s Cross, Shanacool, Scartore and Dungarvan.

Cars and horses are not allowed on the Greenway.

“Greenway users are urged to follow the recommended ‘code of respect’, by keeping to their left, passing others on the right and to bring all litter home with them. Cyclists are asked to ring their bells and cycle at a safe speed while dogs should be kept on a short lead,” he added.

The Waterford Greenway is being developed by Waterford City & County Council with the co-operation of local property owners, the support of communities along the route, and with supporting funding from the Department of Transport, Tourism and Sport, said Mr Power

Maps of the Waterford Greenway will be made available from the Tourist Information Offices in Waterford City and Dungarvan, the Lismore Heritage Centre, the Bishop’s Palace, Medieval Museum, and in hotels and other accommodation providers across the city and county, he added.

From Friday, September 23rd, a map of the Waterford Greenway can be downloaded from www.visitwaterfordgreenway.com.