Cultivating four types of seaweed could generate up to 200 jobs, BIM conference told 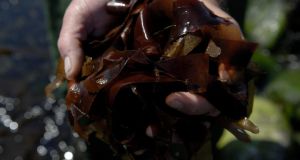 The edible Irish seaweed Dilisk. The global market for farmed seaweed for human consumption is currently worth €6 billion.

A rapidly growing European market for seaweed or “sea vegetables” could generate up to 200 jobs in coastal areas, a new report published by Bord Iascaigh Mhara ( BIM) says.

The report, commissioned for a conference held by BIM in Limerick on Tuesday says that demand for European farmed seaweed is growing by seven-to-ten per cent annually.

The global market for farmed seaweed for human consumption is currently worth €6 billion, and is dominated by China and Japan.

However, cultivation of four types of seaweed in Ireland could provide some 100 new jobs along the west and south-west coasts, with a further 80 to 100 jobs in processing, the report says.

The Irish coastline has some 500 types of seaweed, a small number of which are commercially harvested.

The recent sale of State company Arramara to Canadian company Acadian for an undisclosed sum has generated concern about the future of harvesting rights, given that Acadian/Arramara has applied for licences to harvest two of the most popular types of seaweed on a coastal area from Clare to Mayo.

Seaweed cultivation, which would require aquaculture licensing, has been conducted here on a small scale.

BIM believes it could move to commercial scale and could yield some 2,000 metric tonnes in harvest weight a year – at an additional annual value of €10 million. Cultivation

The report recommends focusing on cultivation of two “brown” seaweed species, Alaria esculenta and Laminaria saccharina, which have been grown in west Cork’s Roaringwater bay and Kerry’s Dingle Bay, and should target higher value “red” seaweeds, used as nori in sushi, and dulse.

Ireland is already the second largest producer of dulse, exporting about five tonnes a year, according to BIM.

Speaking at the BIM conference, consultant Amarjit Sahota says that Ireland was already established as an important seaweed producer and was “well equipped” to raise production levels, and the European market is suffering from “under-supply”, with imports comprising 75 per cent of total sales volumes last year.

Mr Sahota is founder and director of Organic Monitor, a specialist research, consulting and training firm that specialises in “organic and related product industries”.

Irish seaweed farmers targeting the European market should view other seaweed processors as “partners rather than competitors”, he said, as many processor would welcome a new source.

Consumers are becoming “more aware of health and nutritional benefits” of seaweeds, the conference heard. They provide protein and vitamins, and help to maintain gut health.

They are also “anti-carcinogenic” and promote better hormone balance in women.