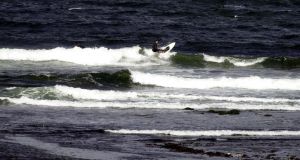 The search for an Irish man missing off Australia’s east coast since Saturday morning has been suspended.

The 19-year-old had been surfing off the coast of Cape Byron, New South Wales. Two companions of the Irish man were rescued but their friend remains missing. A 26-year-old man was helped out of the water and did not suffer any injuries, while a 20-year-old was found on rocks with minor injuries, police say.

“The search has been suspended for the evening after there was no sign of the missing person,” he said. “We will reassess conditions tomorrow and look at recommencing the search upon the request by police.”

Two helicopters and sea craft from three local surf clubs took part in the search after a call to the emergency services. The missing man and his friends were taken by a strong rip in the north corner of Tallow Beach.

“Lifesavers from Byron Bay surf club, who were on a jet ski, located the first male coming ashore at Wategoes,” Mr Keogh said. “A second man was located along the cliff face around Cape Byron, clinging to rocks, by rescuers.”

“The three people were right off the front of the Cape; they were surfboard riding,” he said. “Patient one is on the beach and being treated by ambulance officers.

“Patient two has also been located, but is very distressed about the third person — apparently he was right behind him — but so far the search has failed to located this person. We are very concerned about this third person.”

The initial search for the Irish surfer was hampered by windy conditions, rough seas and very cold water, which made it difficult for jet ski crews to stay in the water for long periods.