Poet buried in Co Derry after requiem mass in Dublin 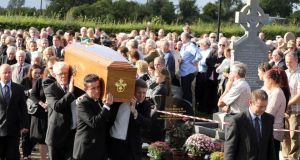 Seamus Heaney was laid to rest this evening in a country churchyard in south Derry under the shade of sycamore and ash trees.

“May the green sods of Bellaghy rest gently upon him,” Father Andrew Dolan told mourners that packed the graveyard and surroundings of St Mary’s parish church to bid farewell. It is estimated that almost 3000 people attended.

He said the town of Bellaghy was honoured that Heaney had chosen to be interred in his home town, in a newly opened grave just yards from the Heaney plot where seven members of his family are buried, including his young brother Christopher, celebrated in the poem Mid-Term Break.

The name of Seamus Heaney would be “for ever intertwined” with Bellaghy and its people, said Fr Dolan. The poet was “proudly and warmly welcome back to south Derry”, he said.

Fr Dolan said Heaney would continue to exercise a “strong influence” on the lives of countless people for generations to come.

After these short few words he asked the mourners to observe a minute’s silence in memory of the Nobel Laureate.

Minutes earlier, as he stood in the yard of St Mary’s church waiting for the cortege, Fr Dolan spoke of the importance of the poet for his home town and recalled the Troubles.

“When Bellaghy had bad news Seamus Heaney was always good news,” he said.

The people of Bellaghy lined the streets as the cortege led by a lone kilted piper arrived from Dublin around 5 pm.

Throughout the afternoon in pleasant late summer sunshine people started arriving at the churchyard and one of the earliest was his friend from the 1960s, Dr Maurice Hayes, a Co Down man and former public servant to people on both sides of the Border.

He described Heaney as “huge in every way”, a poet who “never lost the run of himself” and who gave a “voice to the people of the North”.

“He made poetry that people could grasp onto. But he gave too much of himself, he was hugely generous”, he added.

“I remember Marie saying ‘you know he signed so many copies of his books that in future days the valuable copies will be those that are unsigned.’”

And Dr Hayes recalled the poet bringing a handwritten poem dedicated to his daughter Margaret at her christening.

“I said I must put that away because by the time she is getting married he will have the Nobel prize. I put it away so carefully that I couldn’t find it again and I don’t think Joan or Margaret have ever quite forgiven me.”

Heaney also wrote a poem about visiting the wake house of his neighbour, Francis Hughes, one of the hunger strikers.

After the burial the Archbishop of Armagh Dr Eamon Martin led the mourners in Salve Regina, which was heartily sung.

Thereafter the mourners sympathised with the Heaney family.

Among the many artists present were his two good friends, Brian Friel and Seamus Deane. Also there was Eileen Hammond, widow of another great friend and musician David Hammond.

Among the many clergy present was Heaney’s friend, the retired Bishop of Derry, Dr Edward Daly.