Scots braced for no deal: ‘We need parity with Northern Ireland’ 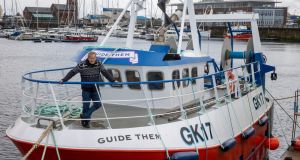 Looking out onto the wind and rain the in Clyde port of Greenock in western Scotland, Alistair Roberts borrows a weather image to describe 2020.

“With Brexit and Covid, it’s been a perfect storm,” he declares.

Small boats dominate local fishing, where Roberts – who is also the vice-chair of the Clyde Fishermen’s Association – catches langoustines and sends them either to Kilkeel, Co Down for processing, or straight to the Continent.

Closures of restaurants and hotels caused by the Covid-19 crisis has cut his earnings in half this year. When combined with Brexit, it could put him out of business.

Like many fishermen, he voted Leave, believing it would mean small boats like his would regain some of the UK’s fish quota. With fish remaining one of the sticking points in the trade talks, he is now far from hopeful.

“It’s just one big mess at the minute and nobody knows what way to turn. We need parity with Northern Ireland, ” he tells The Irish Times, reflecting the views of many of his fellows.

Worried about a no-deal Brexit, he says: “At the end of the day we’ve been pally with the Irish fishermen for years and we don’t wish them any bad luck, but all we’re looking for is parity.”

While supporting the Northern Ireland protocol “very strongly”, the Scottish government’s Brexit minister Michael Russell points out, however, that Scotland “voted more substantially to Remain, and we’ve had nothing at all”.

“I don’t think we yet know what the impact will be, but we expect it to be difficult, because quite clearly we will not have the advantages that are built into the protocol . We expect them to be substantial,” he said.

In Cairnryan, lorries are still being loaded onto the ferry for the journey to Belfast without friction. Lorries arrive, they are checked in electronically in seconds, and join numbered lanes awaiting boarding.

Come January 1st, however, Cairnryan and its fellow west coast port will find itself on the front line of the Irish Sea border between the United Kingdom and the European Union.

Though much remains to be agreed, it appears highly unlikely at this stage that delays at ports because of checks and paperwork can be avoided come January 1st.

In Scotland, as in Northern Ireland, the reality remains that “some shipments will have to be checked because there are [sanitary and] phytosanitary issues, there’s no doubt about that,” says Russell.

Lorries could be “stacked” in Stranraer, which has more space than Cairnryan, because of custom and phytosanitary paperwork delays: “We do not have enough environmental health officers, not enough vets,” Russell says.

While the agreement in principle reached between the sides on Tuesday on the protocol should provide clarity as to how the Irish Sea border will operate, those who will have to work it daily have yet to see the detail.

However, Séamus Leheny from the Freight Transport Association in Northern Ireland is not alone in believing that it will come into force by degrees in the opening months of the new year.

Firstly, there must be a period of grace for chilled food imports; and a trusted trader scheme as argued for by major UK supermarkets to safeguard food supply chains from Great Britain to Northern Ireland.

Tuesday’s deal is “a positive step”, says Leheny, not least because it gives industry “a bit of breathing space” to implement the protocol – and, he says, potentially creates the ground where a trade deal might be reached.

The news will have been welcomed by truckers in Cairnryan, too.

“It [Brexit] is going to be a mess,” says Paul McKeown, who owns Dungannon-based firm Tyrone Transport.

“I could have 200 deliveries in the one load. There will be terrible paperwork involved, and somebody’s going to have to do all that,” he told The Irish Times.

“This is fresh food,” says Michael Wauchop, pointing to his refrigerated trailer. “That can’t be held up for long, and Tesco wants it on the shelves as quickly as possible. They will have to come to some agreement.”

“It’s all talk, hearsay,” says Mark Williams. “ Nobody knows what’s going to happen.” He shrugs. “I’m not that bothered about it – whatever happens will happen.”