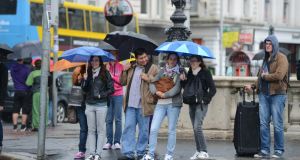 Dublin has been voted the world’s second friendliest city by readers of Rough Guides, the popular travel guidebook series.

This month, Rough Guides asked its fans and readers to vote for the friendliest city they had visited. The guidebook has now unveiled the results, with Dublin coming in at number two, after Glasgow.

Rough Guides said of Dublin: “Spend a weekend enjoying the Georgian townhouses, squares and historic churches among some of the friendliest people in the world.”

Welcoming the news, chief executive of Tourism Ireland Niall Gibbons said it chimed with their own research about Dublin’s attractiveness to overseas visitors.

“ It is the warm welcome and the ‘craic’ here that resonates with our overseas visitors and makes Dublin and Ireland such a great choice for a short break or holiday,” he said.

“ This accolade by the readers of Rough Guides gives Tourism Ireland another wonderful platform to continue to promote Dublin and the island of Ireland throughout the world as a ‘must-see’ destination.”

This latest accolade follows Dublin being voted the world’s fifth friendliest city earlier this year by readers of Condé Nast Traveler, the prestigious US travel magazine.

Dublin shared its fifth place spot with Sydney, Australia and was the only European city in the top five. The friendliest cities were Auckland, New Zealand and Melbourne, Australia.

The magazine said readers described Dublin as a “vibrant city” that’s a “bibliophile’s dream” which was “green, lush, and very walkable”.