Rotunda hospital moves to stub out smoking on grounds

The Master of the Rotunda hospital Dr Sam Coulter-Smith has broken up the hospital's smoking area with an axe as part of a drive to curb smoking in the hospital. The Rotunda Hospital is committed to being a smoke-free campus by November 1st. 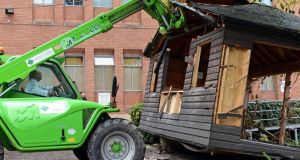 The Master of the Rotunda Hospital Sam Coulter Smith, uses a fork-lift to demolish the existing outdoor smoking cabin, at the rear of the hospital today. Photograph: Eric Luke/The Irish Times.

Smoking on the grounds of Dublin’s Rotunda maternity hospital is to be stubbed out from Friday, an occasion which was marked by the “ceremonial” demolition of a smoking hut on the hospital campus today.

Dressed in scrubs and a doctor’s coat and watched by bemused staff, the master of the hospital, Sam Coulter Smith took a sledgehammer to the hut which has sheltered smokers for the past decade.

After a few hefty swings of the hammer, a fork-lift was brought in to complete the demolition of the hut ahead of the ban on smoking on the hospital campus .

“There is a national initiative to foster the reduction of smoking; therefore health care institutions need to be central in pushing forward its cessation,” Mr Coulter Smith said. “We’re probably the biggest maternity hospital in the country now; we’re a leading light in world of obstetrics so it was important that we also took a leading role in this initiative.”

He said that, while it upset many people to see pregnant women smoking, there were still those who did so. “You would need to have been born on another planet not to know about the health implications of smoking...yet every city centre hospital sees patients who have complications with their health that relate to smoking who continue to smoke,” he said.

However, he said the move was not just about patients but also about the health of hospital staff who, he hopes, will also be discouraged from smoking as a result of the ban.

Almost half of Ireland’s hospital campuses are now smoke-free and, under the HSE’s Tobacco Control Framework, all HSE settings are due to implement a tobacco-free policy by 2015.