Rose of Tralee: occupying a weird place in our psyche 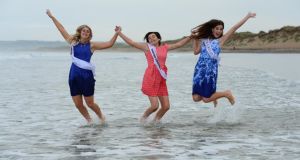 A long time ago in a galaxy far, far, away my youngest sister was visiting me in Dublin.

We were going to kill more than 32 birds with one stone here. The sister was going to learn not to get pregnant if she had somewhere better to be in the evening. She was going to sup at the teat of Irish culture and she was going to get some good frock ideas and, maybe, the inspiration to take up the tin whistle.

What more could a 14-year-old girl want?

Then a funny thing happened on the way to the Dome…

The West Midlands Rose took to the stage. I think the host was Uncle Gaybo and didn’t the sister jump out of her seat as she realised that the Rose was none other than Kirsty Flynn.

She sat next to Kirsty’s sister in the Holy Child Convent School in Birmingham.

Now we were rolling.

Eventually, I would feel obliged to explain to my sister that it was not usual to tune in, turn on and know the winner of the Rose of Tralee. Not at all.

“What a bizarre, masochistic way to spend an evening: glued to the box, getting annoyed at something you know beforehand will annoy you, just so you can bitch and feel all superior,” wrote Darragh McManus in the Irish Independent.

I used to feel the same way about Top Gear.

Unlike McManus, I virtually won the Rose of Tralee, so it will always conflict me, just as Jeremy Clarkson conflicts me. No, sorry, he doesn’t. Clarkson is a fool.

None of the Roses is a fool. Of course not. And McManus is right “slagging off the Rose is about the lamest thing imaginable.” After all, didn’t current Rose of Tralee Maria Walsh just win us equal marriage with one flash of her Newbridge Silver tiara? #loveyoumaria

This week those perfect specimens of Irish diasporic womanhood, the direct-action performance group – Speaking of Imelda which operates from England – turned up in Tralee to make their own contribution to the festival.

The pro-choice feminist group said they had chosen to speak at the festival as its aim was to crown the winner for being “lovely and fair”.

“We wanted to highlight that the lack of reproductive rights on the island of Ireland makes women’s lives far from rosy,” a spokeswoman told The Irish Times. “We have nothing against the Roses themselves, but the idea of judging women in a national competition should be subverted.”

They have nothing against the Roses, they underlined. These women were not on social media slagging off the participants.

Roses get pregnant too and, as Speaking of Imelda pointed out, women in the north and south of Ireland don’t have any choices “because they don’t have any reproductive rights”.

Most people seem to be letting the Roses carry on regardless.

And why not? The Roses are clever, talented, funny, inspirational and generally gorgeous.

The Rose of Tralee contest was well-intentioned (with its acknowledgement of distant blood, distant love and distant longing) but misconceived (with its reduction of Irish women to lovely vessels).

But maybe that’s what Ireland always wanted, lovely vessels who would sail away and take their womanhood with them.